Daryn Colledge's time as an NFL player and Super Bowl champion allowed him to frequently travel and meet the troops... 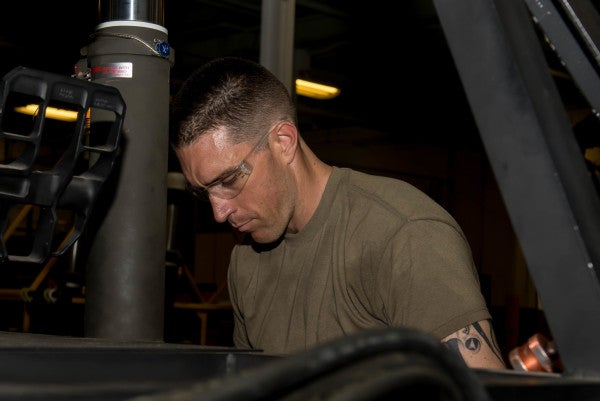 Daryn Colledge's time as an NFL player and Super Bowl champion allowed him to frequently travel and meet the troops defending this country, men and women he long admired.

Now he's one of them in Hampton Roads.

Colledge, a 34-year-old former offensive lineman for the Green Bay Packers, Arizona Cardinals and Miami Dolphins, joined the Idaho National Guard in March. He's stationed at Fort Eustis while he trains to be a Blackhawk helicopter mechanic with the 168th Aviation Regiment.

Colledge declined an interview request, but appeared in an internal Army news story at Fort Eustis earlier this month.

“When I decided to step away from professional sports I wanted to fall back on my degree of communications, and I did that, but soon realized that world didn't appeal to me,” Colledge said in the Army story.

“I came from a business where you're in a fight all the time, and it's a physical team thing. I didn't find that in the normal day-to-day life. Then I saw that being a Soldier would keep me hands-on, active and keep me in that team environment that I craved and needed so much.

He likely didn't need the extra paycheck. During his nine seasons in the NFL, Colledge made more than $24.5 million, according to spotrac.com, a site that tracks professional athletes' pay. After playing his final season with Miami in 2014, he retired in Boise, Idaho, where he was a standout at Boise State University.

Colledge garnered headlines throughout the sporting world in March when he decided to enlist. He posted on Twitter at the time that he wanted “to join a new team, start a new chapter, and seed out a new adventure.”

“After a year of retirement, a much needed vacation, and overdue time with my family, I've decided to hit the free agent market. After much deliberation, and discussion, I'm proud to sign my longest term deal of all time, 8 yrs and have enlisted in the Army National Guard,” he wrote.

It's rare for a professional athlete to join the military, and Colledge's enlistment quickly drew comparisons to former Arizona Cardinals player Pat Tillman, who became an Army Ranger before he was killed in Afghanistan in a friendly fire incident.

“Pat is a hero. I'm just a man working in the shadow of a giant. Just trying to catch up,” Colledge wrote on Twitter.

Colledge has several relatives who served in the military and had a long history of supporting troops as a player. He even traveled to the Norfolk-based amphibious assault ship USS Kearsarge while it was deployed to the Red Sea in 2011 following Green Bay's Super Bowl victory over the Pittsburgh Steelers. He also visited the aircraft carrier USS Carl Vinson in the Arabian Sea and the U.S. Navy base in Guantanamo Bay, Cuba.

“The reason we get to live out our dream and do what we do, is because of what all of you do every day,” Colledge said in a Navy news story about his visit to the Kearsarge. “I am honored to be here, and I thank you for allowing me to see the great work you do every day.”

In his Twitter post, Colledge said his decision was influenced by the times he met troops while he was a pro football player.

“After all my time in the NFL, traveling, meeting, and supporting the troops, I've decided to step up and stand shoulder to shoulder with them,” he wrote. “This was not a decision made lightly, we live in an ever changing world, and at this time in my life I feel it is best served with me in defense of my family, state, country.”

Colledge grew up in North Pole, Alaska, a suburb of Fairbanks, where he learned to fly small aircraft in the Alaskan backcountry. Working in aviation for the Army was a natural fit for him.

He says his particular unit is ideal because it is active when it comes to fighting forest fires and search-and-rescue missions back home in Idaho. There's a possibility he could get into a flying position in the future, according to the Idaho National Guard.

“It is a great pleasure to work with someone who has had such a successful career and is such a positive influence to so many people. There are many reasons that people join the National Guard, but at the root of all those reasons is service to our country and community,” Staff Sgt. Jason Kremer, Idaho Army National Guard recruiter, wrote in a newsletter.

As a player, Colledge often sported a beard and hair that sometimes reached his shoulders. But military photos show that look has been replaced by a clean-shaven face and a closely cropped haircut.

Colledge will return to Idaho once his advanced training at Fort Eustis is complete. While he's only required to report to duty one weekend a month and two weeks a year, Colledge said he wants to do more, according to the Army story.

“Mechanics are lucky enough to get to serve over 60 days a year, and I plan on filling all of those days plus the opportunities to volunteer for other missions, like fire suppression and search and rescue,” Colledge said. “For me, it's not just a hobby, I'll be in there full time if they allow me.”

He said he's already planning to re-enlist once his contract is over.