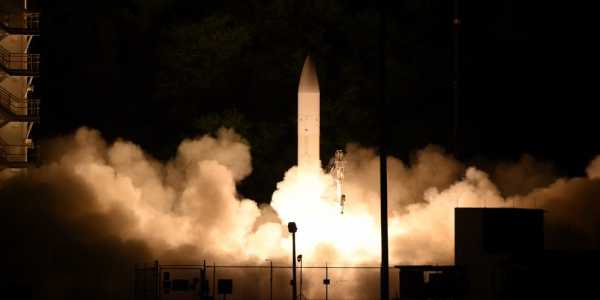 In May, Trump boasted about U.S. military strength in the Oval Office and in the process announced that the U.S. is building a new missile he said was much faster than anything currently available.

“We're building incredible military equipment at a level that nobody has ever seen before. We have no choice with the adversaries we have out there,” the president said.

“We have — I call it, the 'super duper missile,'” Trump said, explaining that he “heard the other night, 17 times faster than what they have right now. You've heard Russia has five times and China's working on five or six times. We have one 17 times, and it's just gotten the go-ahead.”

Related: Trump claims the US is building a 'super duper missile'

In June, the president claimed that the weapon could strike a target 1,000 miles away, hitting within 14 inches of center point.

“What he was referring to, really, was the recent flight test that we've performed in March where we flew 17 times the speed of sound,” a senior defense official told CNN Thursday.

Toward the end of March, the U.S. military successfully carried out a flight test of a glide body for future hypersonic weaponry.

“Today we validated our design and are now ready to move to the next phase towards fielding a hypersonic strike capability,” said Vice Adm. Johnny R. Wolfe, the director of Navy's Strategic Systems Programs, said in March.

The Pentagon said in a statement that the glide body “flew at hypersonic speed to a designated impact point,” adding that “this event is a major milestone towards the department's goal of fielding hypersonic warfighting capabilities in the early- to mid-2020s.”

Hypersonic missiles fly at speeds of at least five times the speed of sound, but their speed — faster than a cruise missile but slower than a ballistic missile — is not what makes them deadly. These weapons fly along unpredictable flight paths, making them very difficult for traditional air-and-missile defense systems to intercept.

A missile able to fly at 17 times than the speed of sound is an impressive feat, but U.S. adversaries claim they can beat that. Russia, for instance, claims its Avangard hypersonic glide vehicle, a weapon launched atop an intercontinental ballistic missile, can fly at speeds 27 times the speed of sound. Russia put the Avangard into an operational status last December.

The U.S. Army intends to field a ground-launched hypersonic weapon in 2023, with the Navy fielding a ship-launched variant the same year, Defense News reported in March following the glide body test. A submarine-launched version is expected in 2024.