The Supreme Court has rejected a major 2nd Amendment challenge to California’s strict limits on carrying concealed guns in public.... 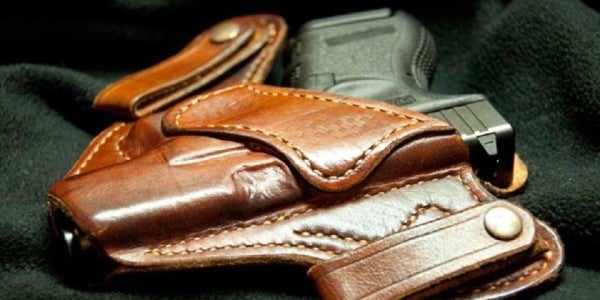 The Supreme Court has rejected a major 2nd Amendment challenge to California’s strict limits on carrying concealed guns in public.

The justices turned away an appeal from gun rights advocates who contended most law-abiding gun owners in San Diego, Los Angeles and the San Francisco Bay area are being wrongly denied permits to carry a weapon when they leave home.

The justices let stand a ruling from the 9th Circuit Court of Appeals which held last year that the “2nd Amendment does not preserve or protect a right of a member of the general public to carry concealed firearms in public.”

In dissent, Justice Clarence Thomas said the court’s action “reflects a distressing trend” in the treatment of the 2nd Amendment as a disfavored right. Justice Neil M. Gorsuch joined his dissent.

The high court’s action is sure to be a disappointment to gun-rights advocates, who were cheered by President Donald Trump’s appointment of Gorsuch to fill the seat of the late Justice Antonin Scalia.

It is the latest of several actions by the court that suggest that while the Constitution protects an individual right to “bear arms,” the scope of that right is quite limited. In a pair of rulings in 2008 and 2010, the justices struck down ordinances in Washington, D.C., and Chicago that banned nearly all private possession of weapons, including the keeping of handguns at home for self-defense.

Since then, however, the court has turned down a series of constitutional challenges to laws and local regulations that prohibit people from carrying guns in public or from buying and owning rapid-fire weapons.

California law says law-abiding owners may obtain a permit to carry a concealed weapon if they can show “good cause.” This state law is enforced by the county sheriffs. In San Diego, Los Angeles and other urban counties, sheriffs have set a high bar for what qualifies as a “good cause,” such as a particular need for protection. “Simply fearing for one’s personal safety is not considered good cause,” a San Diego official told a judge there.

The case of Peruta vs. California has been closely watched as a test of whether 2nd Amendment rights go beyond the home. A federal district judge upheld San Diego’s strict enforcement policy, but in 2014, a 9th Circuit panel struck down the policy as unconstitutional. In a 2-1 decision, the panel said the 2nd Amendment protected a right to carry a gun in public.

But last year, the full 9th Circuit reconsidered the issue and rejected this broader view of the 2nd Amendment. Citing English history back to 1541, Judge William Fletcher said the law for centuries had restricted the carrying of concealed firearms without a license These restrictions were enforced in the American colonies prior to the Constitution, he said.

“Based on the overwhelming consensus of historical sources, we conclude that the protection of the 2nd Amendment — whatever the scope of that protection may be — simply does not extend to the carrying of concealed firearms in public by members of the general public,” he wrote for a 7-4 majority of the appeals court.

In January, former Solicitor Gen. Paul Clement filed an appeal with the high court on behalf of gun owners. He argued that millions of law-abiding gun owners in California and elsewhere were being denied the right to carry a gun in violation of their rights to armed self-defense under the 2nd Amendment.

In a separate action Monday, the justices without comment refused to hear the case of Sessions vs. Binderup, which had the effect of upholding a gun-rights victory for two Pennsylvania men. Both had lost their rights to own a gun after being convicted of misdemeanors. They won a ruling restoring their rights to own a gun based on the 2nd Amendment.