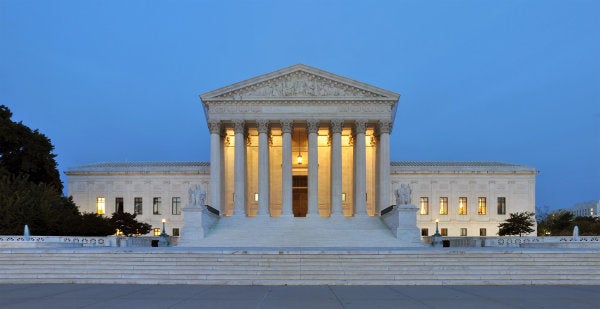 Retired Marine Corps Staff Sgt. Steven Larrabee was convicted of sexually assaulting a bartender, the wife of an active-duty Marine, at a bar in Iwakuni, Japan, where he worked as a civilian. He had been retired — technically, placed on the Fleet Marine Corps Reserve status list — for three months.

Dinger appealed his discharge, arguing that the case should not have fallen under the military court system and that a dishonorable discharge should be reserved for “those who separated under conditions of dishonor.”

Attorneys for both Marines argued that the cases should have been considered by the U.S. Supreme Court because they have far-reaching consequences for military retirees. The law stipulates that “retired members of a regular component of the armed forces who are entitled to pay” and “members of the Fleet Marine Corps Reserve” are subject to court-martial jurisdiction.

But Stephen Vladeck, a University of Texas law professor who represented Larrabee, said that this argument no longer holds true with the rise of the reserve component. He called the idea that retirees are reserved for future service “anachronistic,” adding that military retirees are no longer among the “pool of persons at the ready” and thus should not be subject to the UCMJ.

“Increasingly, the function has been performed by reserves, not retirees,” he said.

He cited one provision in the UCMJ that makes “contemptuous words” used by a commissioned officer “against the president, the vice president, Congress” and others as punishable by court-martial.

“From Adm. Bill McRaven to Gen. Michael Hayden and Gen. Martin Dempsey, some of President Donald Trump's more visible critics of late have been retired military officers. And a provision of federal law … makes it a crime, triable by court-martial,” he wrote in a blog post on Lawfare. “But does the Constitution really allow the government to subject to military trial those who have retired from active duty — in some cases, long ago — even for offenses committed while they are retired?”

In a Feb. 16 post on Duke University School of Law's Lawfire blog, Dunlap said Congress explicitly states that the UCMJ applies to retirees and that Vladeck's arguments about the impropriety of senior officers speaking out against the president, as well as the “anachronistic” idea that retirees can be recalled to active duty, aren't valid.