US surgeon general: COVID-19 outbreak ‘to get bad’ this week

The U.S. surgeon general issued his starkest warning to date on Monday about the health risk posed by the novel coronavirus (COVID-19) outbreak, warning Americans that the crisis was "going to get bad" this week. 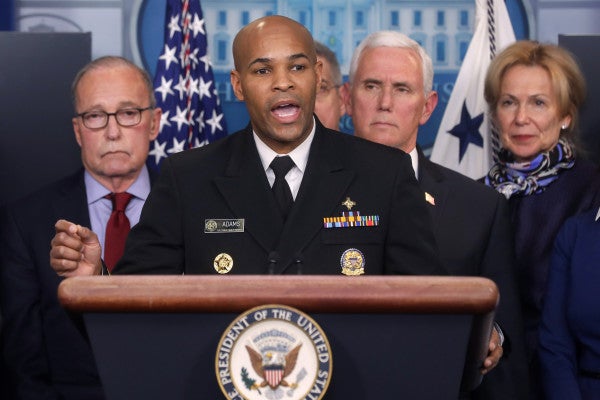 WASHINGTON (Reuters) – The U.S. surgeon general issued his starkest warning to date on Monday about the health risk posed by the novel coronavirus (COVID-19) outbreak, warning Americans that the crisis was “going to get bad” this week.

As of Sunday night, states with a population totaling more than 100 million people have imposed restrictions to curtail the virus, which has infected nearly 35,000 people and killed 428 in the United States, putting the country on a track similar to those of devastated European countries such as Italy and Spain.

“This week it's going to get bad,” Adams told NBC's “Today” show, saying there were more people out to see Washington's famed annual cherry blossoms than there were blossoms. “This is how the spread is occurring. Everyone needs to be taking the right steps right now: stay home.”

Trump imposed a 15-day national action plan a week ago urging Americans to follow the direction of the “stay at home” orders of state and local officials.

At the same time, he has also been far more optimistic than health experts have been about the prognosis for the outbreak while also voicing concern about the negative effect of shutting down wide swathes of the economy.

“We cannot let the cure be worse than the problem itself,” Trump tweeted in all capital letters overnight. “At the end of the 15-day period, we will make a decision as to which way we want to go.”

Also on Monday, the U.S. Federal Reserve mounted an extraordinary new array of programs to offset the disruptions to the economy caused by the outbreak, backstopping an unprecedented range of credit for households, small businesses and major employers.

Congress was trying to address concerns over the economy, which is forecast to shrink as a result of emergency measures. U.S. Senate Democrats and Republicans were working on an economic relief bill, aware that failure to strike a deal could trigger further heavy losses in U.S. stock markets.

The Senate was due to reconvene at noon ET (1600 GMT) to consider the bill, which Democrats argue favors corporate interests at the expense of healthcare workers, hospitals and state and local governments. Republicans in turn accused them of obstructing a badly needed stimulus in the midst of a national emergency.

Independent experts have suggested far more than 15 days will be needed to halt the spread.

New Jersey Governor Phil Murphy on Monday called on the federal government to do more to provide personal protective equipment, noting that all states “are all out looking for the same thing” in competition with each other.”We need a lot more,” Murphy told CNN. “Anything they could do is going to make a huge difference.”Murphy reiterated his call for the federal government to collectively provide $100 billion in direct cash assistance to New Jersey, New York, Connecticut and Pennsylvania.

Trump on Sunday defended his decision to hold off using his powers under the Defense Protection Act to ramp up supplies, telling reporters at a news conference that nationalizing businesses “is not a good concept.”

Murphy noted that on one day last week 15,000 New Jersey residents applied for unemployment benefits, crashing the state's computer systems.”We need the feds to come in a big way to help us,” Murphy said. “Folks are hurting.”

The first of two U.S. military hospital ships was dispatched on Monday to boost hospital bed capacity as the number of U.S. coronavirus cases swells.

The U.S. Naval Ship Mercy departed San Diego with nearly 900 staff on board to take on non-coronavirus patients and allow local personnel to manage those on shore with the virus, the Pentagon said in statement. Trump on Sunday said the Mercy would be dispatched to Los Angeles while the USNS Comfort would go to New York.