Report: Syria Accidentally Shot Down A Russian Plane While Fending Off An Israeli Missile Strike 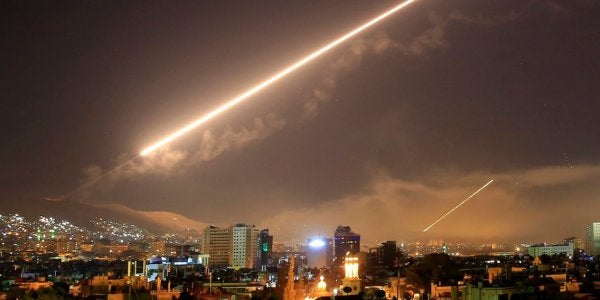 U.S. military officials believe Syrian forces accidentally shot down a Russian aircraft, according to a CNN report published on Monday.

Syrian anti-aircraft artillery reportedly responded to a number of Israeli missiles that were launched towards the coastal city of Latakia when it accidentally shot the Russian maritime patrol aircraft, according to a U.S. military official cited in the report.

Syria, Russia's ally in a prolonged proxy war in the region, claimed its air defenses “intercepted a number” of the missiles headed toward the city, Reuters reported on Monday, citing state media.

Russia's defense ministry also announced it had lost contact with an IL-20 aircraft carrying 14 service members, Syria's state-run media reported. Russia's presence in Latakia includes a large naval base, which was reportedly under attack by an unclaimed missile strike that Syria alleges to have come from Israel.

Although Israeli Defense Forces also declined to comment on the missile strikes, Israeli Prime Minister Benjamin Netanyahu said on Sunday that his country will be “taking action to prevent our enemies from arming themselves with advanced weaponry.”

A U.S. Central Command spokesman did not comment on where the strikes originated from but denied U.S. forces were involved: “The U.S. was not involved in any strikes in Western Syria or in the shootdown of any planes tonight,” U.S. Navy Capt. Bill Urban said in a statement to Business Insider.

Russia and the Syrian regime have previously boasted about their air defense capabilities. After an airstrike in which US and its allies fired over 100 missiles towards suspected chemical weapons facilities in April, Russian forces claimed the “high-effectiveness” of Russian-supplied weapons and “excellent training of Syrian servicemen” had shot down 71 missiles.

Russia's claim was contradicted by U.S. reports that said Syria's air defenses were “largely ineffective” in response to its “precise and overwhelming” strikes.

“The Syrian response was remarkably ineffective in all domains,” US Marine Corps Lt. Gen. Kenneth F. McKenzie said at the time.