US-backed militia are working to evacuate civilians trapped by ISIS

A U.S.-backed militia has sent trucks to the edge of Islamic State's dwindling territory in eastern Syria to evacuate hundreds of civilians as well as surrendering fighters, many of them foreign-born, commanders said Tuesday 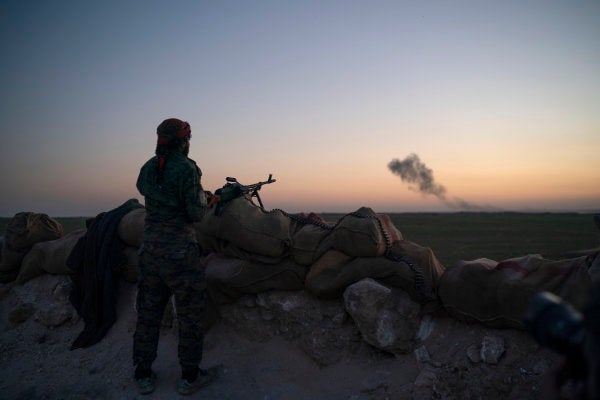 AMMAN, Jordan — A U.S.-backed militia has sent trucks to the edge of Islamic State's dwindling territory in eastern Syria to evacuate hundreds of civilians as well as surrendering fighters, many of them foreign-born, commanders said Tuesday.

About 200 families remain trapped in Islamic State's last remaining slice of territory in eastern Syria, the United Nations said Tuesday, as sporadic clashes continue between the extremists and a U.S.-backed Kurdish militia known as the Syrian Democratic Forces, or SDF.

U.N. human rights chief Michelle Bachelet expressed concern for the families, including many women and children, trapped in the village of Baghouz, near the Iraqi border.

“Many of them are apparently being actively prevented from leaving by ISIL,” Bachelet said, using an acronym for the extremist group, in a statement released Tuesday.

They “continue to be subjected to intensified air and ground-based strikes by the U.S.-led coalition forces and their SDF allies on the ground.”

An SDF spokesman said in a phone interview Tuesday that Islamic State had snipers shooting at those fleeing and had mined the road out of the enclave.

“The battle isn't over yet. There are skirmishes every now and then, and we don't know how long it will take to evacuate all the civilians,” said Adnan Afrin.

“But when battles intensify in other fronts, civilians are then able to escape and reach SDF forces.”

The evacuations come as the Kurdish militia is poised to overrun the last vestiges of Islamic State's self-declared caliphate, which the group established five years ago and at its zenith controlled more than 34,000 square miles of territory in Syria and Iraq.

Since then, the militant group has steadily ceded ground to multiple international campaigns, including one by a U.S.-led coalition working in concert with the Kurds and another by Russia and its Syrian government allies.

Now, the SDF surrounds a few hundred militants and their families in a nearly quarter-mile area, the Kurds say. But the offensive has stalled for fear of inflicting civilian casualties.

The U.N. called on the coalition and its allies to provide safe passage to those fleeing while offering protection to those who wished to remain.

“Civilians continue to be used as pawns by the various parties. … They should not be sacrificed to ideology on the one hand, or military expediency on the other,” said Bachelet.

“If protecting civilian lives means taking a few more days to capture the last fraction of land controlled by ISIL, then so be it.”

SEE ALSO: A Marine Raider Was Awarded The Silver Star For Taking Out An Isis Car Bomb