The United States will leave "a small peacekeeping group" of 200 American troops in Syria for a period of time after a U.S. pullout, the White House said on Thursday, as President Donald Trump pulled back from a complete withdrawal. 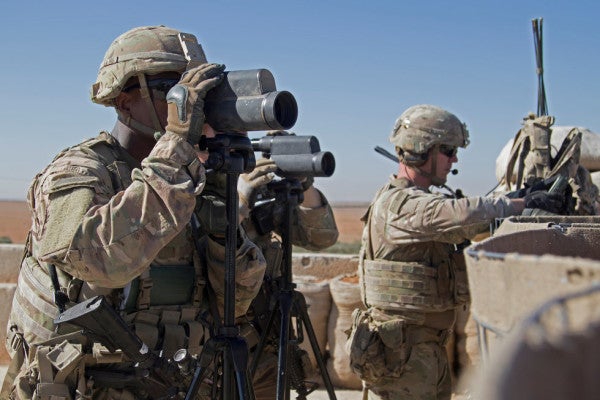 WASHINGTON (Reuters) – The United States will leave “a small peacekeeping group” of 200 American troops in Syria for a period of time after a U.S. pullout, the White House said on Thursday, as President Donald Trump pulled back from a complete withdrawal.

Trump in December ordered a withdrawal of the 2,000 American troops in Syria on the defeat of the last remnants of the Islamic State militants there.

But Trump has been under pressure from multiple advisers to adjust his policy to ensure the protection of Kurdish forces, who supported the fight against Islamic State and who might now be threatened by Turkey, and to serve as a bulwark against Iran's influence.

“A small peacekeeping group of about 200 will remain in Syria for a period of time,” White House spokeswoman Sarah Sanders said in a statement.

The decision was announced after Trump spoke by phone to Turkish President Tayyip Erdogan. A White House statement said the two leaders agreed, regarding Syria, to “continue coordinating on the creation of a potential safe zone.”

A senior administration official said Trump's decision had been in the works for some time. It was unclear how long the 200 troops would be expected to remain in the area or where exactly they would be deployed.

Leaving even a small group of U.S. troops in Syria could pave the way for European allies to commit hundreds of troops to help set up and observe a potential safe zone in northeast Syria.

“This is a clear direction to our allies and coalition members that we will be on the ground in some capacity,” the senior administration official said.

The decision to retain peacekeepers could help Trump overcome criticism that he had ordered a precipitous withdrawal from Syria that could lead to Islamic State's gathering strength.

Turkey wants to set up a safe zone with logistical support from allies and says it should be cleared of the U.S.-backed Kurdish YPG militia, which Ankara considers a terrorist group.

On Thursday, acting Pentagon chief Patrick Shanahan met with his counterpart from Belgium. Before the meeting, Belgium's minister of defense, Didier Reynders, was asked whether he would be open to keeping troops if there were no American forces left.

“We are waiting for preparation of the withdrawal of U.S. troops and we are waiting now for more discussions about the … if it's possible and good collaboration with the defense department but it was the beginning of the discussion in Munich,” Reynders said.

Until now, European allies have balked at providing troops unless they received a firm commitment that Washington was still committed to the region.

U.S. officials have told Reuters that while in Munich last week, Shanahan held a meeting on Syria with a small group of defense ministers. In the meeting they talked about needing some sort of security arrangement in northeast Syria after the United States has left. Shanahan will meet his Turkish counterpart on Friday.