Pulling US troops out of Syria could lead to thousands of ISIS fighters escaping from jail, Syrian official warns

"We are not threatening to release these criminals, but it's not realistic to ask us to both fight the Turks and house all of the west's ISIS members." 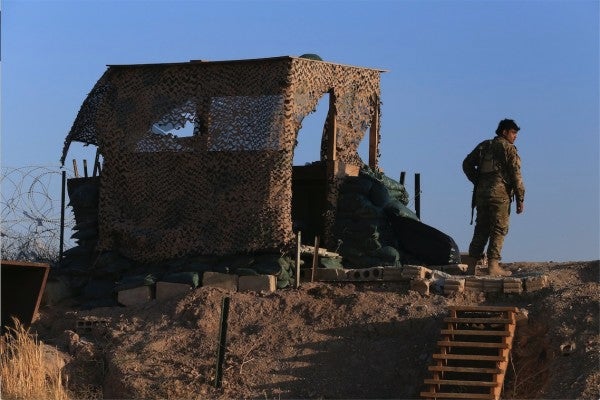 A long awaited Turkish operation to push back against Kurdish militias, once aligned with the US in the fight against ISIS, from its border with Syria threatens to destabilize a fragile region, and raises fears that thousands of captured ISIS fighters could escape Kurdish-run jails amid the confusion.

On Sunday night, the White House announced that it would withdraw US troops based along the Turkish-Syrian border, where they were advising the mostly-Kurdish Syrian Democratic Forces (SDF) in their years along fight against ISIS.

By Monday at least 150 US special operations troops in three key outposts near the Turkish border had already started to withdraw towards a US military base in northern Iraq, SDF officials and local residents told Business Insider.

The withdrawal is set to allow Turkish troops to push into northern Syria and launch an offensive against the SDF, which has links with the separatist Kurdistan Workers Party, or PKK in Kurdish. The PKK is considered a terrorist organization by Turkey, the US, and EU.

SDF commanders immediately accused the US of betraying its long time ally. The SDF was the main ground force in the fight against ISIS in Syria, and has had thousands of fighters killed in the conflict.

After more than a month of negotiating with Ankara over how to push the Kurdish fighters back from the border with Syria, and establish a “safe zone” that could potentially house more than three million Syrian refugees in Turkey, the White House Sunday night appeared to wash its hands of the conflict ordering its troops to stand down operations.

Concerns over a US withdrawal of troops and the abandonment of critical allies last December led then-Secretary of Defense James Mattis to resign, along with other key figures in the anti-ISIS coalition.

On Monday, the SDF directly accused the US of failing to keep its promise to protect its allies from a Turkish offensive.

The force said it had met all its commitments under an earlier plan to avoid the apparently impending conflict.

Despite all the efforts we did to avoid conflict, our commitment to the security mechanism agreement and taking necessary steps on our end, the US forces did not carry out their responsibilities and have withdrawn from border areas with Turkey,” the SDF said in a statement.

“Turkey's unprovoked attack on our areas will have a negative impact on our fight against ISIS and the stability and peace we have created in the region in the recent years. As the Syrian Democratic Forces, we are determined to defend our land at all costs.”

A SDF military official at a base outside Kobani, a Syrian border city, told Business Insider that Turkish military preparations for a border inclusion were underway in plain sight of Kurdish defenses.

This has led to an organization-wide mobilization to protect the largest autonomous enclave outside of Syrian government control, the official said.

“All of our fighters and units are under orders to prepare to protect Rojava ,” said the official, who spoke anonymously because he does not have authorization to speak directly to the press.

This mobilization, said the official, means that SDF-run prisons holding thousands of captured ISIS fighters would soon be understaffed.

“We have been housing 2,000 foreign fighters from Daesh as well as thousands more Iraqi and Syrian terrorists and this prisons will not be as secure if we are fighting the Turkish military,” the official said.

“We are not threatening to release these criminals, but it's not realistic to ask us to both fight the Turks and house all of the west's ISIS members.”

While the White House statement said an agreement had been reached that Turkey would take control of the prisoners, comments Monday by Turkish President Recep Tayyip Erdogan were much less certain.

“There are ISIS prisoners from France, Germany, other countries. They say: 'We don't want to have control over them,'” Erdogan said in televised remarks.

Mass jailbreaks of captured fighters is a long time favorite tactic by ISIS and its predecessor, al Qaeda in Iraq.

In 2014, an ISIS campaign led to fighters being broken out of prisons in Iraq's Anbar Province, as well as in Mosul. In that campaign, at least three prisons were hit in the six months that bolstered the groups with thousands of previously detained fighters.

The White House statement giving the Turks the green light to enter northeastern Syria included a vague reference to Turkey taking responsibility for all captured ISIS fighters held in the Kurdish controlled areas, but the SDF said there have been no discussions on how this handover of control would work.

“The Americans have only added confusion to a very dangerous situation,” said the official.

There are substantial and grounded fears that ISIS could repeat its jailbreaking tactics in the confusion of a Turkish invasion.

Kurdish troops guard more than a dozen facilities, including the al Hol camp in southern Syria where about 70,000 ISIS family members are currently held.

While al Hol is far from the disputed border, the SDF official told Business Insider that the already overstretched camp — which has been the scene of repeated security violations amid fears that ISIS members have taken control of daily life inside the facility — would be nearly impossible to properly fund and secure during a Turkish military offensive.

“We cannot do both and we will always pick protecting our people first,” said the SDF official.