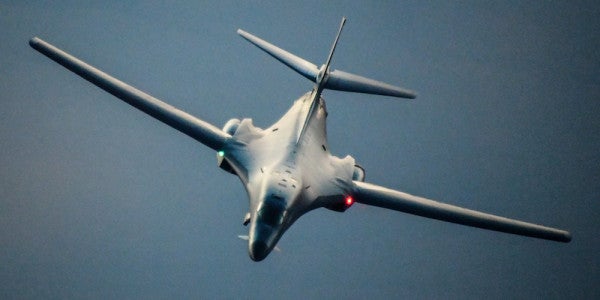 The F-22 Raptor did have a role in the Syria strikes after all, and the extended range version of the Joint-Air-to-Surface Standoff Missile-Extended Range wasn't used, according to new statements from U.S. Air Forces Central Command.

The stealth fighter was providing overwatch for U.S. and partner troops on the ground while the U.S., UK, and France were launched strikes on chemical weapons facilities in western Syria, officials said.

Meanwhile, the JASSMs used in the April 14 strikes “were, in fact, not JASSM Extended Range (JASSM-ER) munitions, rather, the munitions used were JASSM-A, or the standard, non-extended range versions of the munition,” AFCENT spokesman Capt. Mark Graff said Thursday.

The use of 19 JASSMs still marked the first operational use of any variant of the missile, Graff said.

AFCENT officials said that they wanted to correct the record after Military.com asked the command earlier this week about the F-22 missing out completely on the high-profile operation.

Lt. Col Damien Pickart, also an AFCENT spokesman, originally told Military.com on Monday the Air Force's premier fifth-generation fighter was not flying alongside a pair of B-1B Lancer bombers that dropped missiles on the Syrian targets, nor was it in the area.

Graff, told Military.com on Thursday that, “U.S. Air Force F-22 Raptors played an integral role in protecting ground forces during and after the multinational strikes against Syrian chemical weapons production facilities on the morning of April 14.”

Graff did not say how many F-22s were airborne, nor in what regions in Syria they conducted the overwatch mission.

“Thanks to its unique fifth-generation capabilities, the F-22 was the only airframe suited to operate inside the Syrian integrated air defense systems, offering an option with which to neutralize [Integrated Air Defense System] threats to our forces and installations in the region, and provide protective air support for U.S., coalition and partners on the ground in Syria,” Graff said.

It is unclear why the Pentagon or AFCENT officials did not initially disclose the F-22's role when speaking in detail about the strike during a briefing on Saturday.

It is also unclear why officials touted the Lockheed Martin-made JASSM-ER.

When asked directly by the New York Times during a briefing at the Pentagon on Saturday, whether the JASSM used was Lockheed's latest version, Marine Lt. Gen. Kenneth McKenzie, the Joint Staff Director, confirmed its first deployment.

“So we did employ the JASSM-ER,” McKenzie replied.