Less than 24 hours after two U.S. Navy destroyers pulled up to Syria's Mediterranean coast and let fly a blistering... 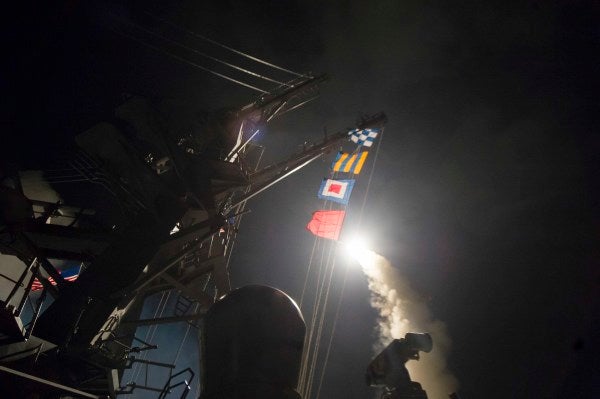 Less than 24 hours after two U.S. Navy destroyers pulled up to Syria's Mediterranean coast and let fly a blistering salvo of 59 cruise missiles, Syrian warplanes took off from the damaged air base targeted by the strike, according to the Syrian Human Rights Observatory.

The U.S. strike, retaliation for a chemical attack in northeastern Syria that killed at least 80 people earlier this week, targeted “aircraft, hardened aircraft shelters, petroleum and logistical storage, ammunition supply bunkers, air defense systems, and radars” at Sharyat air base, according to a Pentagon statement.

But Syria and its Russian backers have many airbases and lots of military infrastructure in the country.

The U.S. intentionally launched a limited strike, which was too small and focused to realistically prevent Syrian forces from flying military aircraft in their country.

“The U.S. took extraordinary measures to avoid civilian casualties and to comply with the Law of Armed Conflict. Every precaution was taken to execute this strike with minimal risk to personnel at the airfield,” Pentagon spokesman Capt. Jeff Davis said.

Images of the aftermath of the strike released by the Pentagon show that the runways, which the U.S. suspects Syrian forces used to launch the aircraft that carried out the deadly attack, went unharmed by the cruise missiles, while aircraft hangars bore the brunt of the damage.

Shayrat airfield in a satellite image released by the Pentagon, after the US fired missiles from Arleigh Burke-class guided-missile destroyers, the USS Ross and USS Porter.DoD photo

Despite being warned about the strike, and suffering no casualties, Russia responded by suspending military communications and agreements with the U.S., thereby increasing the risk that an accidental clash between U.S. and Russian forces, who operate close to each other in Syria, could escalate into a larger conflict.

Russian Prime Minister Dmitry Medvedev said the move put the U.S. and Russia “one step away” from war.

In the aftermath of the strike both Turkish President Tayyip Erdogan and Syrian rebel groups, who oppose Assad, called for more U.S. action against Syrian forces.

Nikki Haley, the U.S. ambassador to the UN, told an emergency Security Council meeting on Friday that the U.S. is “prepared to do more,” against the Assad regime “but we hope that will not be necessary,” according to Reuters.

“The United States will not stand by when chemical weapons are used. It is in our vital national security interest to prevent the spread and use of chemical weapons,” said Haley.