The move was in response to calls from locals in the city. 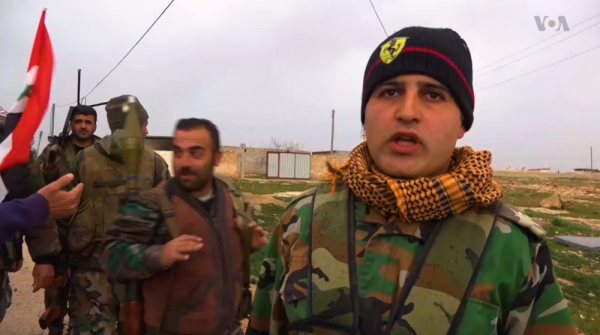 AMMAN, Jordan — Syrian army units on Friday were reported to have entered Manbij, a Kurdish-controlled city that has become a major flashpoint in the country's civil war and an operating base for hundreds of U.S. troops.

The government's entry came at the request of Kurdish militias, who were concerned about the imminent threat of attack by Turkey in the wake of President Donald Trump's abrupt order last week to withdraw all U.S. troops from Syria.

The move, he said, was in response to calls from locals in the city.

Manbij, some 20 miles from Syria's northern border with Turkey, has become a strategic prize for powers competing over Syria's contested northern region, including Turkey, the U.S., the Kurds as well as the Syrian government itself.

Until Friday, it was the Kurdish militia known as People's Protection Units, or YPG, that was in control inside the city and running joint patrols alongside U.S. and French troops.

Outside lies the Turkish army, which for the past few days has been massing its forces, along with Syrian opposition factions trained and supported by Turkey for an incursion into Manbij.

And this past week the Syrian military, including its elite Tiger Forces units, had mobilized toward the city, according to Syrian news outlets and activists.

It was unclear if U.S. forces were still in the city.

Earlier Friday, the YPG issued a statement saying it had withdrawn from Manbij to focus on “fighting Islamic State and other groups east of the Euphrates.”

“Therefore we invite the Syrian government, to which we belong in land, people and borders, to receive these areas and protect Manbij against Turkish threats.”

Activists on social media uploaded a number of videos showing government troops atop pickup trucks on the edge of Manbij.

A number of sources, including pro-government journalists as well as inhabitants in the city, denied that government forces were in the center of Manbij, but instead had remained in and near its outskirts, acting as a buffer against a Turkish attack.

The joint task force led by the United States issued a statement that seemed to cast doubt on the claims of Syrian forces arriving in Manbij. “Despite incorrect information about changes to military forces in the city of Manbij, Syria, CJTFOIR has seen no indication that these claims are true,” the statement from the Combined Joint Task Force — Operation Inherent Resolve said.

Meanwhile, Turkish President Recep Tayyip Erdogan downplayed the Syrian government's deployment in Manbij, saying that Damascus was running “a psychological operation” in the city. Turkey has long fought an insurgency by Kurds in its country led by the Kurdistan Workers Party, known by the initials PKK, and regards the YPG in Syria to be a branch of that group, despite its denials. The Kurds have sought an independent country in a region that overlaps Turkey, Syria and Iraq, although the YPG has stressed its allegiance to Syria.

“Turkey's goal is to teach the YPG/PKK terror group a lesson, and we're determined to make that happen,” said Erdogan, according to a report from state news agency Anadolu. “We are against the partitioning of Syria. Our goal is terrorist groups leaving there. If they leave, then there is no job left for us.”

U.S. support for the YPG, which it considers to be a vanguard in the fight against Islamic State, has been a frequent source of tension with Turkey.

Over the last few years, Washington has lavished money and materiel as well as thousands of U.S. troops, special forces operatives and contractors to assist the YPG in pushing out Islamic State. In announcing the pullout of U.S. forces from Syria, Trump declared victory over Islamic State, although most military analysts believe the group still poses a threat.

As the Kurds clawed back Manbij and areas east of the Euphrates River in 2016 from the Islamist radicals, they began to create a de-facto state under U.S. protection.

Meanwhile, Washington promised it would remain in the area to counter the rise of Islamic State and deny Syrian President Bashar Assad as well as his Iranian ally control over eastern Syria. It established some 19 bases in the area, according to activists.

Over the past year the U.S. has played a hot-and-cold game with Turkey, mollifying Erdogan with a so-called “Manbij roadmap” that would see joint Turkish-U.S. patrols replace the Kurdish forces. At the same time, Washington assured its Kurdish allies it would not abandon them to a Turkish onslaught.

Earlier in December, Erdogan accused the U.S. of stalling, and began preparations for an operation to expel the Kurds from the city.

Yet one phone call earlier this month between Erdogan and Trump, followed by Trump's surprise announcement of a U.S. withdrawal that would give Turkey a greater role in countering Islamic State in eastern Syria, upended the calculations of all those involved in the country's devastating civil war.

Those hardest hit in the fallout of that decision are the Kurds. Previous Turkish incursions into Kurdish-held areas saw widespread persecution, including mass expulsions and abuses by Syrian opposition fighters working in concert with Turkish troops.

Though the Kurds have little love for Damascus (they have long sought greater rights and control over their areas), they are now forced to return to the government's fold.

The YPG's pullout from Manbij also reaffirms Assad's strong position as the war enters its eighth year, even as a number of Arab states that once funded his opponents have raced to reestablish ties.

On Thursday, the United Arab Emirates reopened its embassy, prompting Bahrain and Kuwait to declare they would soon do the same.