A Navy T-45C Goshawk training aircraft out of Naval Air Station Meridian in Mississippi crashed on Oct. 1, killing both... 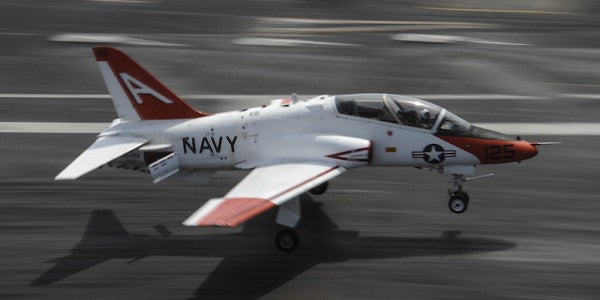 A Navy T-45C Goshawk training aircraft out of Naval Air Station Meridian in Mississippi crashed on Oct. 1, killing both military personnel on board, the Navy confirmed on Oct. 2.

An instructor and a student, whose names have not yet been released, were aboard the aircraft, the Navy said in a released statement.

The fatalities mark the Navy's first Class A aviation mishaps of 2017, according to data published by Breaking Defense, bringing the Navy's total to eight since 2012.

NAS Meridian had initially received reports of a jet crash near Tellico Plains, Tennessee, about 70 miles south of Knoxville, on the evening of Oct. 1, according to FlightGlobal. The next morning, investigators identified the wreckage as the same T-45C that went missing the previous evening.

There have been at least two incidents involving T-45C Goshawks operating out of NAS Meridian in the last year, according to The Clarion-Ledger, although the Oct. 1 crash is the first to result in military fatalities.

While the Navy has not yet identified the cause of the crash, the incident comes at a precarious time for the T-45s typically utilized for pilot training.

After multiple reported instances of hypoxia, more than 100 instructor pilots across multiple squadrons in April refused to operate their T-45 trainer jets until the Navy addressed problems with the aircraft’s oxygen system, leading to aviation officials to indefinitely ground the branch’s entire fleet in an operational pause to address the episodes

But despite the installation of the new CRU-123 oxygen monitor system among the fleet — some 111 of the 170 Goshawks had the new system as of Sept. 14, according to Military.com — there have been four similar physiological episodes since August.

Navy officials told Military.com that the incidents all share “a telling commonality: in the two-seater aircraft, one of the aircrew experienced problems, and the other did not” — suggesting that some pilots are experiencing psychologically based oxygen issues based on stress and anxiety rather than a system failure.

With this in mind, the latest T-45 Goshawk crash may send a jolt of anxiety across T-45 pilots frustrated with the branch’s inability to address the problem. And with good reason: Consider that after Luke Air Force Base ordered a stand-down of F-35A operations on June 12 after multiple instances of hypoxia, officials resumed flight operations even though “no specific root cause for the physiological events was identified during recent visits from experts and engineers.”