The U.S. Military Bombed ISIS In Afghanistan, But The Taliban Are Winning The War

The U.S. military's decision to drop its largest conventional weapon Thursday on positions held by the Islamic State group (ISIS)... 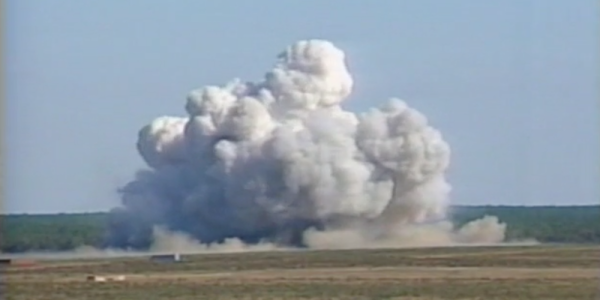 The U.S. military's decision to drop its largest conventional weapon Thursday on positions held by the Islamic State group (ISIS) in Afghanistan came as a surprise to many who noted that the jihadists had only managed to instigate a low-level insurgency in the Central Asian nation. While the huge, costly blast may have sent a message about President Donald Trump's willingness to use extreme measures against his opponents, one of America's biggest bombs may have missed the true target.

The U.S. Air Force dropped an 11-ton explosive, known as the “mother of all bombs” or Massive Ordinance Air Blast (MOAB), on a system of caves and tunnels previously identified as a known hub for ISIS activity in Afghanistan's restive Nangahar province. The 30-foot-long, $16 million bomb was capable of causing a nearly 500-foot blast radius and Thursday's attack killed an estimated 36 militants loyal to the ISIS. Trump lauded the mission, which appeared to be authorized directly by the military, as “another very, very successful mission.” Elsewhere in Afghanistan, however, another hardline Sunni Muslim group, the Taliban, has been regrouping.

“The Taliban have good reason to believe they're winning,” Marvin Weinbaum, former State Department analyst for Afghanistan and Pakistan and resident scholar at the Middle East Institute, told Newsweek.

Like ISIS, the Taliban have advocated for the establishment of a nation based on its ultraconservative brand of Islam. From around 1996 up until 2001 the Taliban, backed by Pakistan, ruled the so-called Islamic Emirate of Afghanistan, which at that time comprised more than 90 percent of the country. The rest was held down by a beleaguered faction known as the Northern Alliance, a group supported by a coalition of regional countries including Russia, Iran and India.

After 9/11, the U.S. launched a military intervention against the Taliban after uncovering evidence that it had collaborated with Al-Qaeda in killing a prominent Afghan political leader named Ahmad Shah Massoud who had attempted to warn the international community about an attack such as 9/11. With U.S. support, local forces ousted the Taliban, but the group's followers all but disappeared.

During his administration, former President Barack Obama announced the withdrawal of U.S. troops from Afghanistan. Washington's stated goal of bolstering local security forces to handle the remaining insurgency had seemingly been realized, and a force of just under 10,000 troops were slated to stay behind. Since then, the Taliban have made steady gains across the outskirts of the nation. Largely ignored by the international community which was focused on unrest in the Arab world and the subsequent rise of ISIS, the Taliban has reclaimed a significant amount of territory in the northern Kunduz and southern Helmand provinces of Afghanistan.

ISIS are believed to have somewhere between 700 and 1000 fighters in Afghanistan, and the global jihadist group has claimed credit for several high-profile attacks – but have failed to gain the local support that the Taliban has enjoyed. The Taliban, which is believed to number around 25,000 individuals, has been so successful that two of its former bitter enemies, Russia and Iran, have come to the table to “hedge their bets,” according to Weinbaum.

“It serves their best interest to keep those lines open,” he added.

Russia and Iran were once united against the Taliban, but heavy U.S. military presence has threatened their interests in Afghanistan. In February, Army Gen. John Nicholson Jr., a top U.S. commander in Afghanistan told the Senate that “Russia has become more assertive over the past year, overtly lending legitimacy to the Taliban to undermine NATO efforts and bolster belligerents” under the pretense that the Taliban were involved in the fight against ISIS, which the group vehemently opposed. He also said that “neighboring Iran is providing support to the Taliban.”

“Iran is worried that with American troops in Afghanistan, the two militaries will end up confronting each other,” Mohammad Akram Arefi, an Iran-educated politics professor at Kateb University in Kabul, told The Washington Post.

Despite accusations of collaboration between the Russia-Iran alliance and the Taliban, the U.S. has paid little attention to the war-torn nation in recent years and Trump has not formed any apparent strategy either. The U.S. assassinated several major Taliban leaders and has continued to lend a hand to Afghan security forces, but Thursday's bombing was by far the most notable intervention lately despite having little tactical effect and not targeting the Taliban.

Instead, Washington has largely pursued a strategy of “buying time,” in the hopes that the Afghan central government would eventually be able to establish a functioning military as well as a political and economic system that could essentially make a deal with and absorb the Taliban, Weinbaum said.

He also said recent territorial gains made by the militants, along with the newfound diplomatic contacts in Russia and Iran, was likely to lead to an upcoming spring offensive that could once again change the political landscape of Afghanistan. If the Taliban does succeed, it would likely draw its sponsor, Pakistan, and its rival, India, into the fight. Tensions between the nuclear-armed states have already escalated, meaning the Taliban's takeover could have global consequences.