With the ‘Tally Bill’, vets could hold the VA accountable when medical malpractice occurs at the hands of a contractor

The recently introduced "Tally Bill" could allow veterans to hold the Department of Veterans Affairs responsible when medical malpractice occurs at the hands of a contractor. 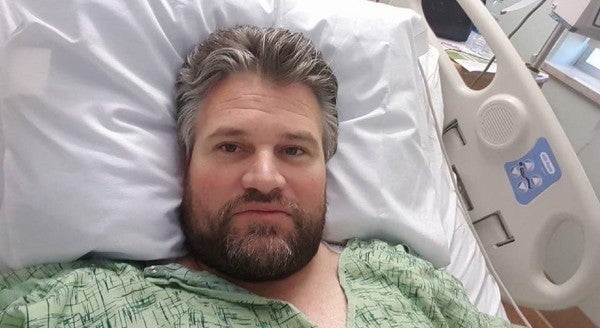 Marine veteran Brian Tally has been fighting for the last three years.

First, he fought to find an answer to the agonizing back pain that landed the once active and fit 42-year-old in a Veterans Affairs emergency room in January 2016. The pain continued for months until Tally sought help outside the department and learned that his VA care providers had mistaken a spine-eating infection for a lower back sprain.

Left with permanent spinal damage, Tally sought to hold the VA accountable for medical malpractice, but in 2017 he was informed that the care provider who made the mistake was a civilian contractor, and so he'd have to bring his medical malpractice lawsuit to state court, rather than federal — a fact he was only made aware of after the statute of limitations for his home state of California had run out.

With the option of a lawsuit closed off to him, Tally turned his attention to changing the VA policy that left him with little legal recourse to sue for damages, and in 2018 garnered support in Washington to introduce the Brian Tally VA Medical Care and Liability Improvement Act, or the “Tally Bill,” before that died quietly in Congress in September 2018.

Now, his days of fighting against “the biggest bureaucracy in the country,” as Tally called it when he spoke to Task & Purpose in June, might finally be coming to an end.

On July 17, Rep. Mark Meadows (R-N.C.) introduced a version of the “Tally Bill.” If passed, H.R. 3813would amend the Federal Tort Claims Act, a law which governs how citizens can sue the government for damages, “to ensure that certain health care contractors of the Department of Veterans Affairs are subject to Federal tort claims laws, to improve the accountability of physicians of the Department, and for other purposes,” according to the bill's text.

Task & Purpose first reported in June that a new version of the “Tally Bill” was in the works, and Meadows' office confirmed that the recently introduced bill would make the following changes:

The provisions are designed to protect veterans from the same situation Tally found himself in three years ago, a spokesman for AMVETS told Task & Purpose in June.

“When you go into a VA hospital, you don't always know who's a contractor and who's a VA employee — that's not revealed to you, even when a wrong is committed,” Sherman Gillums, the chief advocacy officer for AMVETS, previously told Task & Purpose. “It's in the federal government's interest not to reveal that fact until the statute of limitations has run. In Brian's case, they admitted the wrong only after the one year had run out for the time they would have had to sue the contractor.”

While there's still a long way to go before, or if, the bill becomes law, Tally remains optimistic despite the setbacks he's faced.

“This is the second bill being introduced in Congress in less than 10 months,” Tally told Task & Purpose, referring to the first bill by Rep. Dave Brat (R-VA) which failed in Congress after Brat lost his reelection bid in 2018, and the reintroduced “Tally Bill” by Meadows.

“I promised myself that when all this stuff went down, this can't happen again,” Tally said. “After it happened to me, I had to do something. I had to stand up and fight for what's right.”

More than just being the namesake for the legislation, Tally had an active hand in crafting it, he told Task & Purpose. In 2018 he and a group of friends, colleagues, and acquaintances formed an ad hoc legislative team to draft a bill to take to Congress, and he's spent the last year trying to get a version of that bill passed.

“It's become my full-time job,” he told Task & Purpose.

“We can do a lot better as a country, and it's going to take all hands on deck.”