Reeser's grave is a double plot shared with his brother Donald, a Marine killed during the Korean War. 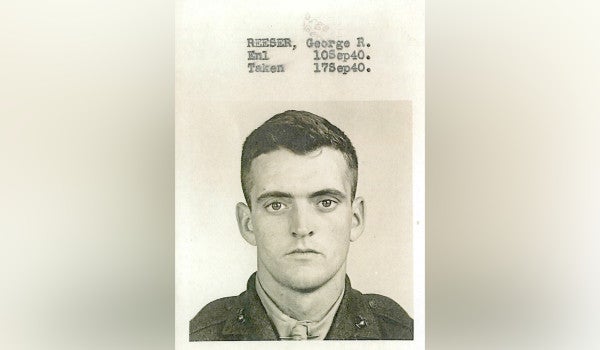 Eighty Septembers ago, he left Washington, Illinois, to join the service. Three years later, he was killed in action during heavy fighting in the Pacific Theater of World War II. Though reportedly buried on a tiny island, his remains were not identified until last year.

Today, Sgt. Reeser will make a long journey, from Pearl Harbor to St. Louis to Washington, under solemn military escort all the way, in preparation for his funeral Saturday.

He made the ultimate sacrifice to help save the world. Mission accomplished, he is finally returning home for good.

In late summer 1940, 22-year-old George Reeser put in his final shift as a gas jockey in Washington, where he lived with his siblings and parents. Long before the attack on Pearl Harbor, he decided to serve his country. That September, he took a train to Chicago to enlist in the Marines.

After his Sept. 10 induction, he was put on another train and arrived Sept. 14 at Camp Elliot in San Diego. He was assigned to Company A, 1st Battalion, 6th Marine Regiment, 2nd Marine Division, Fleet Marine Force, eventually achieving the rank of sergeant.

During the war, the 6th Marines would see heavy combat in the Pacific, arriving at Guadalcanal in early 1943. Later, they were sent to secure Betio Island as part of the Battle of Tarawa. From Nov. 20 to 23, 76 of hours of fighting claimed 99 Marines.

One was Reeser, 25, who died Nov. 22. He was believed to be buried there on the island, but the military listed his remains as “non-recoverable” after the war.

In 2009, a not-for-profit organization, History Flight Inc., discovered the burial site of Reeser and others. The remains were taken to a military laboratory in Hawaii, where ever since scientists have been working to make positive identifications.

This week in Hawaii, a Navy mortician prepared Reeser's remains for transport to Deiters Funeral Home in Washington. At Naval Station Pearl Harbor, his remains were placed inside a casket. A Marine uniform was laid atop the remains before the coffin was shut tight before an American flag was draped across the top.

Thursday morning, a uniformed Marine escort is to accompany the flag-covered casket to a Hawaiian commercial airport. There, the escort is to observe the coffin being loaded into the cargo bay. The Marine is then to board the plane for the flight stateside.

The aircraft is too big to land at the Peoria airport, said Madison Fox, funeral director for Deiters. So, after the plane's arrival in St. Louis about 2:30 p.m., the Marine escort is to witness the casket's removal from the cargo bay. Waiting nearby would be a hearse from Deiters, along with members of the Reeser's family. On the tarmac, six Marines from St. Louis would serve as pallbearers, moving the casket into the hearse.

Then the hearse will begin the trip to central Illinois, accompanied by other vehicles carrying the six Marine pallbearers, the Hawaii escort and Reeser's family. Four Peoria-area veterans-support groups – consisting of about 50 motorcycle riders – are to flank the procession from St. Louis to Washington.

Friday, the pallbearers and Hawaiian escort will return to the funeral home for the visitation, which will run 4 p.m. to 6 p.m. and is open to the public. They also will return to Deiters on Saturday, when the casket will be moved by Marines into a hearse for transport to Mt. Zion Cemetery outside Deer Creek, the final resting place of relatives of Reeser.

There, with the casket still draped in the flag, a graveside service will be held at 10 a.m. His grave is a double plot and double tombstone, shared with brother Donald, a Marine killed in action during the Korean War in 1952. Since then, the site has awaited George Reeser.

The service will end with full military honors rendered by the U.S. Marine Corps. After a bugler plays taps, the pallbearers will commence a precision flag-folding ceremony. The flag will be carefully folded 13 times, representing the 13 original colonies, into a tricorn shape, symbolic of the tricorn hat worn by soldiers of the American Revolution. The flag will then be handed to Reeser's family.

The pallbearers will then offer the salute of a rifle volley. Afterward, they will stay onsite as long as the family remains at the graveside.

Then George Reeser will be laid to rest, more than eight decades after leaving home to give his all for his country.