75 years after his death, the remains of a Marine killed in World War II are coming home

Dolan was born five years after Marine Corps Reserve Pfc. Kenneth W. Likens was killed in a World War II battle in 1943 on the Pacific atoll of Tarawa. 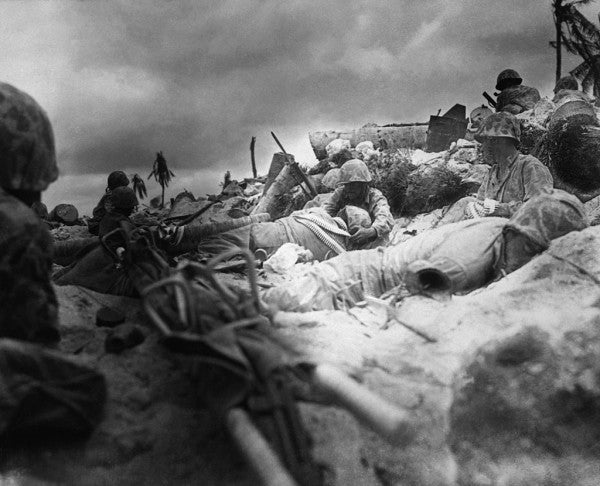 Kenneth Dolan was named after an uncle he never met but heard so much about.

Dolan was born five years after Marine Corps Reserve Pfc. Kenneth W. Likens was killed in a World War II battle in 1943 on the Pacific atoll of Tarawa.

For decades, Dolan's grandmother and mother held out hope that the body of the 20-year-old Mount Clemens man would be found.

Three-quarters of a century after his death, it was.

“It was really bittersweet,” said Dolan, 71, who now lives in Florida, as he became emotional during a telephone interview Thursday with the Free Press. “I'm really proud for our country, what they've done for him and my family.”

The Defense POW/MIA Accounting Agency announced Thursday that Likens was accounted for on May 31, 2019 — more than 75 years after he was killed on Nov. 22, 1943.

Likens was a member of Company B, 1st Battalion, 6th Marine Regiment, 2nd Marine Division, Fleet Marine Force, which landed against Japanese resistance on the small island of Betio in the Tarawa Atoll of the Gilbert Islands, according to a release from the agency.

It stated that during several days of intense fighting at Tarawa, about 1,000 Marines and sailors were killed and more than 2,000 were wounded. Likens died on the third day of the battle.

“My grandmother, for the longest time, held out hope that his body was going to be found. It took her a long time to grieve her son's death,” said Dolan, whose grandmother and mother told him stories about his uncle.

Dolan said about four years ago, his mother was contacted by the Department of Defense, who wanted her DNA since she was Likens' sister.

“She submitted, and we didn't hear a word,” Dolan said. “My mother died on Jan. 27 (of this year). She was 92 years old. She always held out hope they'd find his remains.”

They did, but sadly, not until several months after his mother died.

Dolan said he received a message from the Marines in June, confirming his uncle's remains were found.

According to the agency release, Likens was reported to have been buried in a cemetery on the island, eventually named Cemetery No. 33.

“In 1946, the 604th Quartermaster Graves Registration Company (604th GRC) centralized all of the American remains found on Tarawa to Lone Palm Cemetery for later repatriation,” the release states, “however, almost half of the known casualties were never found. No recovered remains could be associated with Likens, and in October 1949, a Board of Review declared him 'non-recoverable.' “

But in 2009, History Flight Inc., a nonprofit organization, notified the agency that it found a burial site on Betio Island and recovered the remains of what were believed to be missing American service members who had been buried in Cemetery No. 33.

In March of this year, following continued excavations, a previously undiscovered burial trench was uncovered.

The remains were taken to the agency's laboratory in Hawaii. There, scientists used dental, anthropological and chest radiograph comparison analysis in addition to circumstantial and material evidence, according to the release.

The agency says 72,671 service members are still unaccounted for from World War II, of whom about 30,000 are assessed as possibly recoverable.

Last week, Dolan said, a Marine representative showed him and his wife a booklet containing detailed information on where his uncle had been buried, how they identified him, pictures, his service record and a photo of Likens when he enlisted.

Dolan said Likens' skeleton was X-rayed and that his uncle may have died from multiple injuries from shrapnel from a shell that may have exploded in front of him. He said they believe there were parts of his boots and his poncho in the grave. However, Dolan said, “they never found his dog tags.”

In October, Dolan, who attended high school and college in Michigan, will return to metro Detroit for the Oct. 25 burial of his uncle at Great Lakes National Cemetery in Holly.

Dolan's grandparents, originally from Canada, moved to Mount Clemens in the late 1930s, he said. He said his grandfather worked at Chrysler. They had another child, who died of pneumonia when he was just 8 years old, Dolan said, adding it was hard on his grandfather when he lost his second son in the war.

Dolan said his mother and uncle grew up in Mount Clemens and went to Mount Clemens High School. His father, he said, was a World War II veteran who went to Germany.

“It was an emotional thing, even not knowing my uncle, the connection with my grandmother,” Dolan said, adding he was his grandmother's only grandchild. “I never met (my uncle), but I felt I knew him.”