Fretting about his possible role in the “Fat Leonard” bribery scandal, in late 2013 the Navy stripped the security clearance... 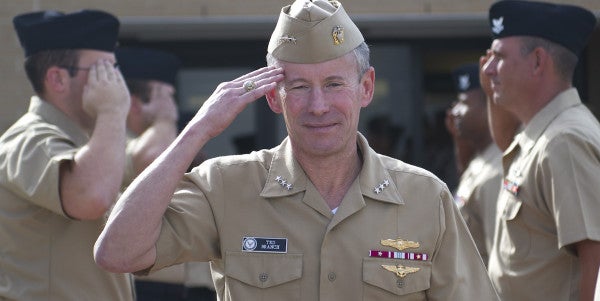 Fretting about his possible role in the “Fat Leonard” bribery scandal, in late 2013 the Navy stripped the security clearance of its top spy, destroying the career of Vice Adm. Ted “Twig” Branch.

On Friday, the Navy closed its review with what it called appropriate administrative action for Branch, the former director of Navy intelligence.

The U.S. Department of Justice — which has handled the prosecution of those who took bribes from contractor Leonard Glenn Francis and his Singapore-based Glenn Defense Marine Asia — brought no charges against Branch.

“The Department of Justice declined to prosecute Vice Adm. Ted Branch and forwarded his matter to the Department of the Navy’s Consolidated Disposition Authority,” said Navy Fleet Forces Command spokesman Cmdr. Mike Kafka in a written statement. “After completing a thorough and detailed review of the evidence, the CDA took appropriate administrative action. This matter is closed.”

“We are very proud of my 37 years of service in the Navy,” Branch said by telephone. “The last three years were extremely difficult for my family and me, but we are glad now to turn the page. I look forward to being able to continue to serve the Navy and our nation as a civilian.”

Helmed by Adm. Philip Davidson, the disposition authority has been sifting through hundreds of cases that federal prosecutors passed on. Federal investigators have uncovered widespread instances of Francis defrauding the Navy on contracts after lavishing officers with teams of prostitutes, pricey resort stays and envelopes stuffed with cash.

Vice Adm. Ted Branch is briefed on the Industrial Human Augmentation System (iHAS) as he tours exhibits during DoD Lab Day at the Pentagon, May 14., 2015U.S. Navy photo

Federal prosecutors and Navy leaders have charged 40 sailors, Department of Defense civilians or Fat Leonard associates in the scandal, including Rear Adm. Bruce Loveless, the Navy’s former director of intelligence operations. He has pleaded not guilty and awaits trial in federal criminal court on conspiracy, wire fraud and bribery charges.

Mabus said by telephone that investigators assured Navy leaders in late 2013 that they had substantial evidence pointing to Branch’s wrongdoing and that they would soon make a decision on charging him.

Mabus and his admirals felt that they couldn’t fire Branch from his intelligence post, but they also fretted that he was close to classified information and they needed to protect that. So they left him in his job but wouldn’t clear him to hear or analyze intelligence data.

What he thought would be settled in weeks ended up dragging on for months, then years.

“As time went on, they (at the Department of Justice) questioned us, ‘Why aren’t you replacing him?’ But we were in a horrible position,” Mabus said. “They made us aware of potential problems, but we had no grounds to relieve him.”

Branch retired from the Navy on Oct. 1 and lives in Coronado.