A former North Texas midshipman who with her boyfriend killed a Mansfield teen after he confessed to an affair has lost... 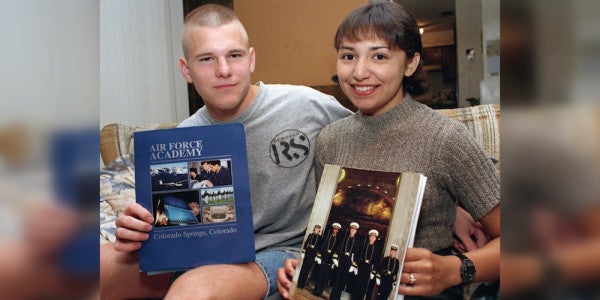 A former North Texas midshipman who with her boyfriend killed a Mansfield teen after he confessed to an affair has lost an appeal to return to protective custody in prison.

Diane Zamora, 40, alleged that her constitutional right to freedom from cruel and unusual punishment was violated when she was moved out of protective custody at the Mountain View Unit in Gatesville and into the general population at the Hobby Unit in Marlin.

In 1998, Zamora and her then-fiance, David Graham, were convicted of capital murder and sentenced to life in prison in the 1995 slaying of Adrianne Jones.

Graham said Zamora ordered him to kill Jones after he admitted to a one-time sexual encounter with her after a cross country meet.

Following an unsuccessful civil rights lawsuit in a U.S. District Court, Zamora appealed her case to the 5th U.S. Circuit Court of Appeals where it was rejected Monday.

The 5th Circuit ruling upheld a summary judgment in favor of Texas prison officials that was issued in January 2017 by U.S. District Judge Robert Pitman.

In it, Pitman said there was no evidence that “having a high-profile case entitles a prisoner to transfer to safekeeping” and that evidence of alleged assaults in her case is “far from reliable.”

Safekeeping units are air-conditioned and inmates get larger cells than in general population as well as a television, according to court documents.

In her appeal, Zamora claimed that because of the national attention her case got — the trial was televised live and resulted in at least two books and a made-for-TV movie — she had been threatened and assaulted by other inmates, according to court documents.

“In essence, Zamora's contentions boil down to a disagreement with prison officials over her housing status,” the court said in an opinion, which also stated that Zamora had not presented evidence showing there was “a genuine issue” and that there was no valid constitutional claim for retaliation.

Zamora is back in the Mountain View Unit, according to prison records, but it's unclear how long she will be there.

Graham, 41, who was found guilty 20 years ago Tuesday, is being housed in the Allred Unit in Iowa Park. The pair won't be eligible for parole until 2036.

Following are five things to know about the case:

Adrianne Jones (left), David Graham and Diane Zamora, 18. The Jones and Graham photos are from the 1996 Mansfield HIgh School yearbook. Zamora is seen in a 1996 booking photo following her arrest in Jones' death.File photo/Associated Press

Zamora was in her first year at the Naval Academy as a midshipman, and Graham was at the Air Force Academy when they murdered Jones, a 16-year-old student from Mansfield.

In his confession, Graham said that Zamora was devastated by his tryst with Jones and that she insisted that killing the teen was the only way to make up for it.

In December 1995, Jones slipped out of her house to meet Graham but never returned. Her badly beaten body was found the next day in a field near Joe Pool Lake in Grand Prairie with two gunshot wounds to the head.

During his trial, Graham said that Zamora was hidden when they picked up Jones, but revealed herself and hit Jones with a dumbbell. When Jones stumbled out of the truck, Graham said he shot her twice in the head as she attempted to flee.

The case had gone cold

Zamora and Graham each returned to their respective service academies, but police said that months later, Zamora began telling classmates about the murder.

The midshipmen reported the story to their superiors in August 1996, and Zamora left the academy. She was arrested the following month, three days after Graham was arrested in Colorado and typed his confession.

Grand Prairie Sgt. Alan Patton, who took Zamora's confession, said in a Dateline NBC interview that neither of the 18-year-olds were suspects until Zamora started talking; the case had gone cold.

In a self-typed confession, Graham said: “I was stupid, but I was in love.”

He said that Zamora felt “betrayed, deceived and forgotten” upon learning of the infidelity with Graham's Mansfield High classmate.

“When this precious relationship we had was damaged by my thoughtless actions, the only thing that could satisfy her womanly vengeance was the life of the one that had, for an instant, taken her place,” he said in the confession.

At first, Graham said he couldn't believe what Zamora was asking him to do, but in the end he was persuaded by love. After they killed Jones, Graham said they regretted their actions.

In her testimony, Zamora claimed that she only wanted to meet Jones — not to kill her — because she thought Graham had made the whole ordeal up to make her jealous.

Zamora said she had also planned to take the blame to protect Graham's career, and also claimed that he had abused her.

More than 10 years after the slaying, Zamora broke her silence on Dateline NBC. She said in that 2007 interview that she was afraid that Graham would kill her, but also that she loved him and wanted to protect him. She denied hitting Jones with a dumbbell.

The next year, Graham said in a prison interview that he wished he had “pled guilty from Day 1.” Both he and Zamora pled not guilty for their roles in Jones' slaying. After initially confessing, Graham denied involvement, then later admitted to killing Jones.

At the trial, prosecutors presented evidence that the sexual encounter with Jones never occurred, but Graham insisted in the interview that it had happened.

After weeks of exchanging love letters in jail, Zamora and Graham's relationship cooled.

In 2003, Zamora married another inmate, Steve Mora, by proxy without meeting face-to-face. They became acquainted after Mora wrote to her.

Graham also married by proxy in 2010.

In a lower court complaint from 2017, Zamora alleged that in June 2015, other inmates ganged up on her and Yolanda Saldivar, the former nurse convicted in the murder of Tejano superstar Selena Quintanilla-Perez, because of their notoriety.

In the court document, Zamora said she only got along with Saldivar and not the other inmates.