Editor’s Note: This article by Oriana Pawlyk and Brendan McGarry originally appeared on Military.com, the premier source of information for the... 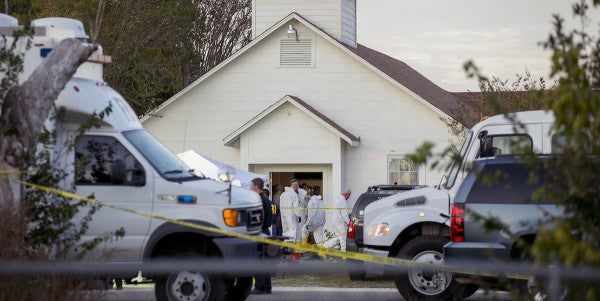 The man who shot and killed at least 26 people at a Texas church on Sunday had previously served in the U.S. Air Force but received a bad-conduct discharge after being court-martialed for assaulting his wife and child, a Pentagon official said.

The shooter, Devin Patrick Kelley, 26, was armed with an assault rifle-style weapon and wearing black tactical gear including a ballistic vest when he entered the First Baptist Church in Sutherland Springs around 11:20 a.m. and started shooting congregants, police said.

Kelley, who was killed after a car chase with police, served in the Air Force from 2010 until May 2014, when he was court-martialed, CBS News reported.

Ann Stefanek, a spokeswoman for the service at the Pentagon, said Kelley was an airman who served in Logistics Readiness at Holloman Air Force Base, N.M., from from 2010 until his discharge.

Kelley was court-martialed in 2012 for two counts of Article 128 of the Uniform Code of Military Justice: assault on his spouse and assault on their child, Stefanek said. He received a bad conduct discharge, confinement for twelve months and a reduction to the grade of E-1, she said.

The New York Times reported Kelley was sued for divorce in 2012 in New Mexico. The news organization also reported that he grew up in New Braunfels, Texas, in a nearly $1 million home owned by his parents.

A couple of years later, Kelley remarried, according to Texas public records.

On April 4, 2014, Kelley, then 23, married Danielle L. Shields, then 19, in Comal County, which is part of the San Antonio-New Braunfels metropolitan area, according to public records maintained by the Texas Department of State Health Services.