In light of President Donald Trump’s Wednesday announcement that transgender Americans will be banned from serving in the military, Austin, Texas’... 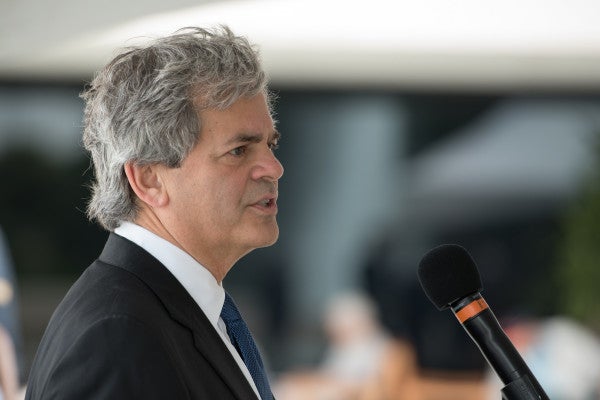 In light of President Donald Trump’s Wednesday announcement that transgender Americans will be banned from serving in the military, Austin, Texas’ mayor had a message: Kicked out? Come to Austin.

In the first of a series of three tweets, Mayor Steve Adler said, “If you’re qualified to keep our country safe you’re qualified to keep Austin safe. Transgender Americans are welcome on our police force.” Adler continued, tweeting that Austin is the “safest big city in Texas” due to its respect for people’s differences. He also tweeted out a link to the application website for Austin Police Department: “If you get kicked out of the service because you're transgender, please apply to join our police force.”

Austin is the safest big city in Texas partly because we know our differences make us a stronger community. 2/

If you get kicked out of the service because you're transgender, please apply to join our police force. https://t.co/QoO4xWmYk9 3/

The Austin Police Department has a transgender officer, and a couple of years ago the city expanded its employee health care plan to cover transgender health services.

In addition, Austin interim Police Chief Brian Manley was among the law enforcement leaders from across Texas who gathered Tuesday at the state Capitol to oppose so-called “bathroom bills” involving transgender people. Manley said such bills would make communities less safe by diverting officers from addressing violent crime to enforcing a bathroom bill.

Austin Police have also taken steps to address their own treatment of transgender people. A task force has worked on redefining how Austin police will identify transgender and gender-nonconforming people after the police department’s handling of the 2016 killing of Monica Loera, a transgender woman who police initially identified by her male birth name.

In March, the City Council approved creation of a LGBTQ Quality of Life Advisory Commission, which will advise the council on issues that affect the LGBTQ community and coordinate educational programs on those issues.

The response to Adler’s tweets from Twitter users was mixed (as was the response from American-Statesman readers when the news broke earlier in the day).

Trump's announcement (which also happened on Twitter) did not specify what would happen to transgender people already in the military. In a White House press briefing Wednesday afternoon, Press Secretary Sarah Huckabee Sanders said that the details were still being worked out.