Map Pesqueira, a 19-year-old from San Antonio, said he was awarded a three-year Reserve Officers' Training Corps, or ROTC, scholarship beginning his sophomore year. But his financial aid is now invalid, he told The Dallas Morning News, under the federal government's new policy that bans many transgender troops from enlisting in the military 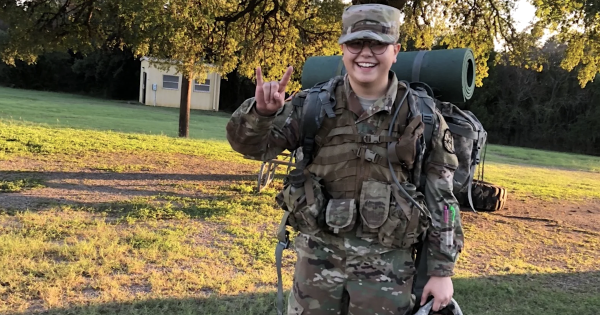 AUSTIN — A freshman at the University of Texas at Austin says he has lost his military scholarship because he is transgender man.

Map Pesqueira, a 19-year-old from San Antonio, said he was awarded a three-year Reserve Officers' Training Corps, or ROTC, scholarship beginning his sophomore year. But his financial aid is now invalid, he told The Dallas Morning News, under the federal government's new policy that bans many transgender troops from enlisting in the military.

“I was told that my scholarship is void,” said Pesqueira, whose story was first reported in The Daily Texan. He added that it was important to tell “the story of ROTC cadets who are relying on a ROTC scholarship to fund their education.

“I call on @UTAustin and all universities to make up lost scholarship money for all transgender students affected by President Trump's transgender military ban. It's not the students' fault they're losing these scholarships,” Castro tweeted.

But the U.S. Department of Defense supplied The News with seemingly conflicting information about what the new policy would mean for transgender students with military aspirations.

“I'm checking on this, as I'm not aware of the specific case,” spokeswoman Jessica R. Maxwell said in an email. “However, policy states that anyone enrolled in ROTC for the upcoming academic year falls under the 2016 policy.”

The confusion could stem from how the new transgender troops enlistment policy affects scholarships for students who are not yet active duty soldiers.

In 2016, President Barack Obama began allowing transgender troops to openly serve as the sex with which they identify. President Donald Trump reversed that policy in March 2018, but his order was put on hold while it was challenged in court. In January, the U.S. Supreme Court lifted that hold while appeals were ongoing; the final legal block was lifted last month.

The new policy went into effect April 11. It bans the enlistment of new troops who have taken steps to transition to a gender different than that assigned to them at birth, either by taking hormones or getting surgery. Transgender soldiers who transitioned before April 12 are grandfathered in and may continue to serve; those who enlist after that date must serve as the sex they were designated at birth.

Pesqueira is a transgender man, meaning he identifies as male but was assigned a different sex at birth. He began his medical transition last year by taking hormones, and has changed his name and gender marker on his identifying documents. Last month, he received top surgery, which usually involves breast removal and chest re-contouring.

Last week, a few days before the new Trump administration policy went into effect, Pesqueira said he reached out to his adviser for information on how his transition would impact his financial aid. To be eligible for a UT-Austin ROTC scholarship, recipients must agree to accept a commission as a Regular Army, Army National Guard or Army Reserve officer. Pesqueira asked if he would be unable to enlist as male under the new policy.

Larry Mullen, deputy chief of the Department of Defense Medical Examination Review Board, said the student would have to reach out to his local ROTC contact for information about his scholarship, according to a copy of the email Pesqueira provided to The News.

Mullen then implied that regardless of his award, Pesqueira would be medically disqualified from service under the new policy.

“Yes, DoDMERB will medically disqualify you using the new standards,” Mullen wrote. “That said, I do not know at this time what criteria/processing/etc., will be used in considering Army waivers for Transgender applicants. When I know something more, I will email you.”

When Maxwell, the DoD spokeswoman, was asked to clarify, she said she could not comment on this case. She provided the following additional information, before referring The News to Army Public Affairs.

“No person, solely on the basis of gender identity, will be denied continuation of service,” Maxwell said. “Individuals are exempt from the new 2018 policy (and fall under the 2016 policy) if they were selected for entrance into an officer commissioning program, and either were selected into ROTC in their preferred gender or received a diagnosis of gender dysphoria while a Service member.”

Pesqueira said Lt. Col. Matthew O'Neill, his ROTC contact at UT-Austin, tried to salvage his scholarship but was told it would not be valid due to the policy change. This could not be independently confirmed with O'Neill, who serves as chair of the university's military science department.

Pesqueira said he does not know why the Department of Defense seems to be giving the media guidance that he said is different from what he was told last week.

“I'm not sure why they're telling you something different because I was told that my scholarship is void,” Pesqueira told The News. “Maybe they caught wind of my story and it started getting very big and they're reconsidering” their stance.

He added that his friends, family and UT-Austin have been supportive. But even if he is allowed to serve openly under the Obama administration's policy, he said he was unsure whether he would enlist if other transgender troops could not.

“I live in San Antonio, which is commonly referred to as Military City USA,” said Pesqueira, who remembers when Fort Sam Houston was opened up to the public for Fiesta and the Fourth of July. “Those events were when I fell in love with the military. Just being able to see the unit cohesion … it really captivated me.”

UT-Austin does not comment on individual students' cases without their consent due to privacy concerns, a spokesman said. But he added that the university tries to offer students help if they lose scholarships or other financial aid.

“We want all of our students to be successful at UT-Austin and we are committed to helping them make this a reality,” J.B. Bird said. “Because every student situation is unique, we offer many different avenues for assistance for students who undergo sudden changes that might affect their access to a UT education.”

SEE ALSO: Here's Everything You Need To Know About The Pentagon Transgender Ban

WATCH NEXT: What It's Like Being Transgender In The Military