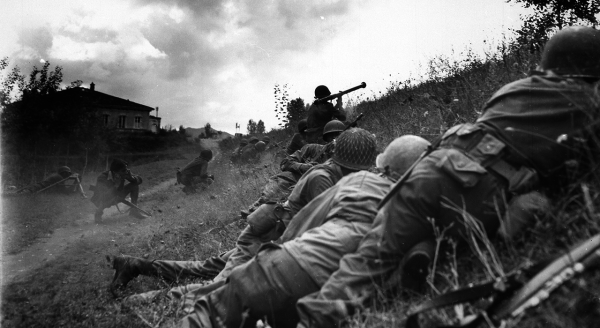 World War II Army veteran Milton Miller says he has never forgotten an act of cowardice by his platoon leader.

It happened in the Alban Hills south of Rome following the Allied Forces' amphibious invasion on the Italian beaches of Anzio in January 1944.

“I saw these six wounded soldiers lying in the open and I threw my Browning automatic rifle to our new platoon leader. The rifle had a fresh clip in it and he was supposed to provide me with cover,” said the 93-year-old Miller, whose voice filled with force as he shared what happened so long ago.

He says he managed to pull the wounded to safety beside “a knocked out American tank” where they waited for a break in the fighting.

“I looked around for the platoon leader and he had taken off,” Miller said in disgust.

Hours later, after he had helped load the wounded onto a Jeep, he returned to his company and spotted the platoon leader.

“I was about six to eight feet away from him and I pulled out my knife,” Miller said. “You can't put in the newspaper what I wanted to do to him for his cowardice.”

The platoon leader, he said, ordered other soldiers to hold Miller at bay.

But with the Allies' push to take Rome, there was little time for revenge.

“We were supposed to be among the first to enter Rome,” Miller said of the 179th Regiment of the Army's 45th Division.

As it turned out, Miller would be among the very first in Rome, but not as a victor. He had been serving as the point man for his platoon when he was taken prisoner.

“I had volunteered to be the point man not because I'm a hero but because it was the right thing to do. I was way ahead of the platoon,” he said of how he ended up captured.

In Rome, Miller said he was interrogated by the German Gestapo, which was seeking intelligence on the Allied Forces.

“I told them I had just joined my company last night,” he said. “I lied.”

The trip to a German prisoner of war camp started in trucks “that drove right past the Vatican,” Miller said, adding that he and fellow POWs were later packed into box cars for a train ride. The train stopped once on the way to allow them to toss out those who died from inhuman conditions – no food and very little water.

Toward the end of their journey, they were forced to march, he said.

“Every time I got near a tree, I stripped the leaves from branches and ate them,” Miller said of how fierce his hunger had grown.

And the German soldiers showed no mercy, according to the stories Miller shared over the years with his family.

“One prisoner could not go on, so the Nazis ran him over with a tank as a lesson to the others. Other POWs attempted to escape when the guards appeared to go out of the area. However, the guards' 'disappearing' was an apparent ruse since they suddenly reappeared, mowing down the fleeing prisoners who had disregarded orders.”

At the prison camp, Miller said he volunteered to work on farms because it meant receiving extra food rations. But it was hardly enough to keep the meat on his bones.

“The conditions at the stalag were abominable. Body lice was on all the prisoners. Given the weakened state of the prisoners due to the poor nutrition and significant weight loss suffered, the body lice issues were a continual torment.”

By the time the POW camp was liberated in spring 1945, as the war in Europe was ending, Miller said, “I'd gone from about 180 pounds to a little over 100 pounds.”

Yet that did not stop him from telling his liberators in a tank unit that he wanted to return to his unit.

“They said, 'You look like crap' and that I wouldn't be able to make it past a couple miles,” he said.

And so Miller was shipped back to America on a Liberty ship with approximately 300 other former POWs.

“They sat you down at a table with a half a chicken, ice cream and other food. You couldn't leave until you ate. They wanted to fatten you up before we came home. I guess we all looked like a bunch of skeletons.”

He spent nine days in the Catskill Mountains in upstate New York “for relaxation,” before he was assigned to Fort Dix, N.J.

“When we were there, they allowed us to pick an assignment close to our homes and I picked a hospital in Canandaigua because they couldn't get any civilian help,” Miller said. “While we were there, we heard we were going to be assigned to an amphibious unit for the invasion of Japan. They needed a lot of bodies and I probably would have died.”

But in August 1945, the war against Japan ended abruptly.

“I was saved when they dropped the atom bombs,” he said.

Back home in Buffalo after the service, Miller said he suffered from flashbacks from the war and drank heavily to push aside the disturbing memories.

“I got a break. I went to work for Trico making windshield wipers and became a tool and die maker. You can't have flashbacks when you are concentrating on a job working with tolerances of a thousandth of an inch. No psychiatrist could have done better and by the way, there was no therapy back then,” he said.

He says he caught an even bigger break when he married the former Gertrude Cohen and raised three children with her.

“I'm very fortunate. I picked the right woman. If it wasn't for her, I wouldn't be alive today,” Miller said. “We're still married 63 years later.”