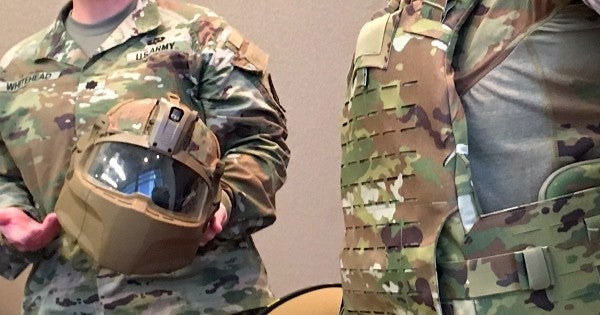 The armor crewman, who was in the turret of an unidentified combat vehicle manning his weapon when a crowd on the street below became violent, was wearing what is known as maxillofacial protection connected to his new Integrated Head Protective System (IHPS), Army equipment officials said at the Association of the United States Army's 2019 annual meeting.

Brig. Gen. Anthony Potts, commander of Program Executive Office Soldier, told reporters at AUSA that a unit had recently called his organization asking for the new technology to help protect them from insurgents throwing rocks.

“They actually called us and said, 'Can you send us some of the maxillofacial capability and shields,' which hadn't been popular at first because it's a little bit heavier,” Potts said. “We sent it to them and, literally within a week, got back word that they had been attacked by a crowd that had thrown a bunch of bricks, and they had a soldier that got hit square in the face with a brick.”

Army officials didn't name the unit, but it was the first issue of the mandible with the IHPS helmet, Lt. Col. Ginger Whitehead, product manager for Soldier protective equipment at PEO Soldier, said in a recent Army news release.

Most soldiers don't need and are not issued the mandible that connects to the IHPS Generation I helmet, Whitehead said.

The Army also recently fielded about 150 of its new Gen II IHPS helmets, which are designed to provide additional protection against “higher-level threats,” such as sniper rounds, without adding the two-pound armor applique attachments to the helmet, Potts said at AUSA.

The new helmet is part of an upgraded, lighter-weight Soldier Protection System that provides more agility and maneuver capability, while still providing a higher level of ballistic protection, Col. Stephen Thomas, program manager for Soldier Protection and Individual Equipment at PEO Soldier, said in the release.

The lighter equipment will “reduce the burden on soldiers” and be a “game-changer” downrange, he added.