After the midterm elections gave the Republicans the majority in Congress, there are some big shakeups coming to several key... 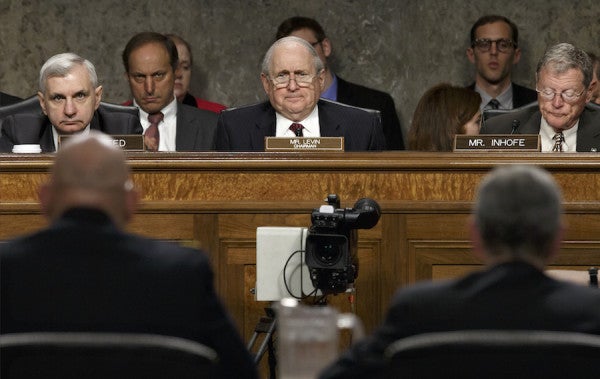 After the midterm elections gave the Republicans the majority in Congress, there are some big shakeups coming to several key defense and veterans committees in the House and Senate. Here’s a look at how things might change when the 114th Congress is sworn in after the New Year.

Michigan Democrat Carl Levin is retiring from the Senate after 36 years, where he has chaired the Senate Armed Services Committee since 2007. He voted against the Iraq War, seeing no connections between Saddam Hussein and the terrorist attacks of 9/11, and opposed the “surge” operation in Iraq, but later said the operation was working. He leaves behind a reputation as a moderate insider with a deep understanding of how to navigate Congress.

His successor will almost certainly be Republican John McCain of Arizona, among the most hawkish voices in the Senate and one of President Obama’s biggest critics on foreign policy. McCain has advocated for military action against Bashir al-Assad in Syria, as well as made calls for attacking Iran over its nuclear program. The legendary Vietnam combat pilot and prisoner of war has also regularly blasted the performance of Pentagon acquisition programs such as the F-35 and the Littoral Combat Ship.

Republican James Inhofe will leave his position as ranking member of the minority party to chair the Senate Committee on the Environment and Public Works. Rhode Island Democrat Jack Reed, a former Army officer and paratrooper, will take Inhofe’s place as ranking member. Reed, a long-time member of the committee, was considered a contender for replacing Chuck Hagel after his resignation on Monday, but has made it clear he does not want the job.

Texas Republican Mac Thornberry will take over as chairman of HASC following Buck McKeon’s retirement, with McKeon’s endorsement. He is widely expected to continue McKeon’s efforts to lift sequestration cuts from the Pentagon’s budget, but also will reportedly also focus on reforming the Department of Defense’s dysfunctional procurement system.

Re-elected ranking member Adam Smith said in a statement that “while Buck will be missed — both as a colleague and a friend — I fully expect that Congressman Thornberry will follow in his footsteps of bipartisanship and thoughtfulness. I’ve worked with Mac for many years, and I look forward to working with him in the future.”

Six Democratic representatives and one Republican currently on the committee are not returning to Congress, and Democrat Ron Barber’s race is still up in the air.

Republican Johnny Isakson from Georgia is the favorite to become the new chairman of the committee, replacing current chairman Bernie Sanders of Vermont. Though an Independent, Sanders caucuses with the Democrats and so will not retain his chair.

Sanders co-sponsored the Veterans Access, Choice and Accountability Act of 2014 along with McCain, and its passage marked a rare bipartisan bright spot in a Congress better known for political gridlock.

Isakson, a veteran of the Georgia Air National Guard, was one of the first in the Senate to raise serious concerns with endemic problems in the Department of Veterans Affairs medical system, holding a field hearing about dysfunction within the Atlanta VA’s mental health program in August of 2013. He worked on the conference committee that wrote the VA reform bill passed this year.

Republican Richard Burr of North Carolina, the current ranking member, will likely move on to chair the Senate Intelligence Committee.

Republican Chairman Jeff Miller of Florida will continue to preside over the committee he has led since 2011. He had been angling to take over the House Permanent Select Committee on Intelligence, but lost it to Republican Devin Nunes of California.

Miller has been an early and staunch critic of the VA, and has consistently argued that the department is too protective of negligent employees and is wasteful with its $153 billion budget.

Democrat Corrine Brown has been selected as the new ranking member of the House after a contentious challenge from Tim Walz. A retired command sergeant major in the Minnesota National Guard, Walz is the highest ranking enlisted veteran to ever serve in Congress, but caucus rules forbid him from serving on more than two committees.