Hyebin Schreiber is getting ready to leave the country she loves — the one her father, a retired lieutenant colonel in the U.S. Army, fought for for 27 years 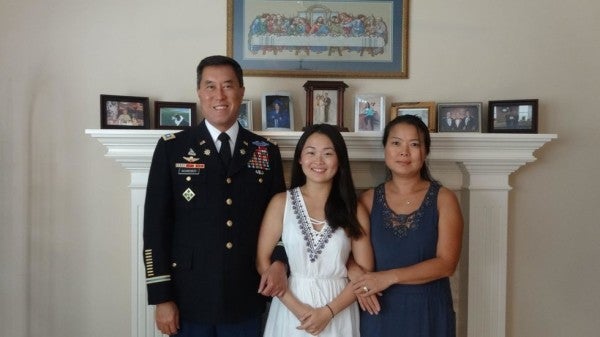 Hyebin Schreiber is getting ready to leave the country she loves — the one her father, a retired lieutenant colonel in the U.S. Army, fought for for 27 years.

The 22-year-old from Lansing, Kan., doesn't want to self-deport. Adopted from troubled relatives in South Korea in 2014, she now possesses a legal Kansas birth certificate.

This is her home.

But for five years, she and her parents, Lt. Col. Patrick Schreiber and his wife, Soo Jin Schreiber, have been in pitched court battles with the U.S. government, which claims that as the result of a regrettable immigration SNAFU, the young woman must go back to South Korea.

The problem is that in 2013, Schreiber, just before he deployed to Afghanistan as a chief intelligence officer, didn't get the right information about filing adoption papers. He says an attorney told him he needed to adopt Hyebin before her 18th birthday for her to have U.S. citizenship. But the age was in fact 16.

“I made a bad assumption prior to leaving, which led to a bad decision that put us in this predicament now,” Schreiber said.

“Everyone replays that last battle. So it lives with you.”

Hyebin currently is allowed to stay under an F1 student visa. But in mid-December, she graduated from the University of Kansas with a degree in chemical engineering. Instead of putting her future in the hands of judges, she's choosing to get on with her career — out of the country.

In the midst of what was one of the proudest moments of Patrick Schreiber's life, a single and gnawing thought kept impinging:

“The end is coming,” Schreiber said.

Lawyers argued the case in September before a panel of judges in the 10th Circuit Court of Appeals in Denver. The Schreibers' attorneys are trying to help Hyebin stay by using a particular provision of the Immigration and Nationality Act.

The lawyers, led by Kansas City immigration attorney Rekha Sharma-Crawford, concede that Hyebin aged out of the adoption provision. But they claim she should still be eligible to apply for citizenship under a different section that covers children “legitimated under the law of the child's residence” before age 18. The fact that Kansas gave her a birth certificate, they argue, indicates Hyebin is a “legitimated” child.

When a Kansas judge told the Schriebers, during her adoption, that Hyebin now belonged to them as if she were their biological child, they took that to heart.

The U.S. District Court in Kansas already ruled against the Schreibers in September 2018. It is unclear when the federal appeals court will rule. It could be any day, week or month. If the court rules in their favor soon, Hyebin would stay.

“I'll tell you who this really impacts: That's Patrick Schreiber,” Sharma-Crawford said. “Because when you talk to him, that man, this war hero, is literally reduced to tears because he says, 'You know, I sat in that courtroom when that judge told me that I was to treat her like she was my biological child, and I have done everything I can to make sure that she feels no different than my biological child. And yet they're telling me that this is not my legitimate child.'

Early on, when it became apparent that Hyebin's late adoption was not passing immigration muster, Schreiber said that he and his wife began preparing their daughter for the fact that she might have to leave the United States.

“We never pulled any punches,” Schreibers said. “It's always been in the back of her mind.”

She also needs to get on with her life.

As a former military intelligence officer with six tours abroad (two each in Iraq and Afghanistan) Schreiber said that his military training has taught him that it would be foolish for the family to bank on a good outcome.

“In the Army, we have a saying,” said Schreiber seated recently in Sharma-Crawford's office. “Piss poor planning leads to poor execution.”

“So that's why we meticulously try to plan and we try to mitigate for everything that can go wrong,” Schreiber said. “The Army is not a cheery, glass is half full. It's what can go wrong in this operation and try to mitigate it by thinking of, OK, at least have some type of plan for branches and sequels. As Mike Tyson said, 'Everyone has a plan until you get punched in the face.'”

Hyebin could stay in the U.S. for two more years under her visa through an apprenticeship. Instead, she is already exploring possible job opportunities in South Korea.

She wants to get a foothold in her career. If the court of appeals rules against her, Sharma-Crawford said the case could be brought to the U.S. Supreme Court. The court receives roughly 10,000 petitions yearly and typically hears arguments in under 100 cases.

“One of the things that she will say,” Schreiber said of his daughter, “is, 'Well, what's the probability of this? Am I just putting off the inevitable? If so, I might as well pull the trigger, grab my chemical engineering degree and get my foot in the door.'”

Schreiber said he anticipates that his daughter will be in South Korea by the spring.

“One of the other things, too, that we emphasized with her is that no matter what happens, no matter what occurs, we will never abandon you,” Schreiber said.

Despite his devotion to the U.S., he said, he and his wife will plan to leave the country and also move to South Korea. Schreiber is 55. He anticipates moving there by age 60, when he can draw on a retirement account.

The family has already thought of housing. He envisioned living in a city high-rise.

“My wife's family is from a small farming community south of Seoul,” he said. “She said, 'Well, what do you think of the smell of manure every morning?'”

He said it is likely they will help rebuild a home on the farm. They are looking to find a way to ship their daughter's baby grand piano.

“When I bought that piano, I saw a piano where she would be sitting there with her children in our front family room, playing and watching her and her kids grow up.”

Now it'll be somewhere else.

Schreiber said that he continues to regret not knowing more about immigration and citizenship rules surrounding foreign adoption. Hyebin came to the U.S. at age 15 in 2012. The next year, before being deployed to Afghanistan, Schreiber consulted with an adoption attorney who said that he had until she turned 18 to legally adopt her.

Had he checked with an immigration attorney, he would have discovered that, for citizenship purposes, she needed to be adopted by her 16th birthday.

“If I could turn back one moment in my life prior to my departure, I would have contacted an immigration attorney instead of saying, 'OK, when I get back, we'll look into it further. … It's one of the things I live with every day.”

Schreiber emphasized that no matter where they live, neither he nor his daughter feel let down or betrayed by the government that argues she is not allowed to stay.

“One of the things I want to make abundantly clear is that we separate this from my military service,” he said. “The issue isn't with the military, nor do I feel like something should be done based on my service.

“I made a bad decision based on a bad assumption. The fault lies with me, and I have no one to blame but myself for the predicament that we're in.

“I wish things could have gone differently. It's a regret that I live with every day, and it's probably the biggest regret of my life.

“But overall we understand that the (U.S. Citizens and Immigration Services) has a job to do. We understand policy. We understand the law. We are just looking at it from the viewpoint of what are some of the other options and if there could be a path for her to remain in the United States as a path to citizenship, is what we're, as a family, really trying to pursue.”

His daughter, he said, has remained positive.

“She is not disillusioned. There is no animosity. There is no ill will,” Schreiber said, nor does he possess any.

“The question of do we want to go back to South Korea: Right now, if Hyebin had her way, she would stay in the United States. It's really her heart's desire.”