In a new trailer for ​'The Irishman,' Robert De Niro stars as Frank "The Irishman" Sheeran, a mafia hitman and ex-soldier who claimed to have killed Jimmy Hoffa 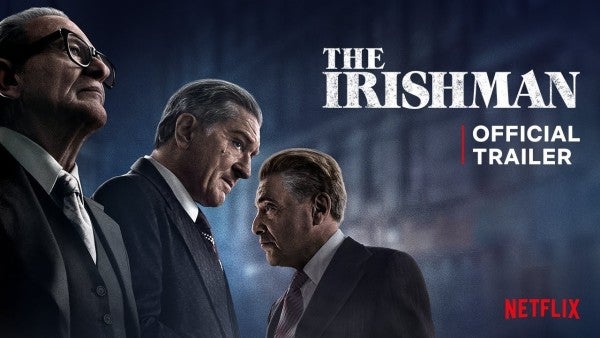 In a new trailer for The Irishman, Robert De Niro stars as Frank “The Irishman” Sheeran, the notorious Mafia hitman and ex-soldier who claimed responsibility for the mysterious disappearance of labor union leader Jimmy Hoffa.

Directed by Martin Scorsese, The Irishman is based on the 2005 book I Heard You Paint Houses by Charles Brandt, a former Delaware deputy attorney general who chronicled Sheeran's life as a hired gun for Pennsylvania's Bufalino crime family

The title of the book was pulled from Hoffa and Sheeran's first conversation, in which the president of the Teamsters Union asked the mobster if he painted houses – code for killing people – to which Sheeran replied yes, adding “I do my own carpentry work, too,” which meant he also disposed of the bodies.

Hoffa's sudden disappearance in 1975 remained a mystery for decades until Sheeran claimed in a videotaped confession prior to his death in 2003 that he was the man who pulled the trigger.

VIDEO: Frank Sheeran's confession from 'Where is Hoffa?'

In addition to detailing Sheeran's role in dozens of murders, including that of Hoffa (played by Al Pacino), Brandt's book also explored Sheeran's 411 days of combat service during World War II and how that segued into a career as a hitman for the mob — and based on the trailer, it seems like the film will follow the book's lead in that regard:

“It was like the Army, you followed orders,” De Niro narrates in the trailer, before there's a quick cut to Sheeran during World War II. “You did the right thing. You got rewarded.”

Sheeran enlisted in the Army after the Dec. 7, 1941 attack on Pear Harbor and served in Europe during World War II, during which time he was involved in multiple killings both on and off the battlefield, some of which would be considered war crimes under the Geneva Convention, according to the Courier Post.

After the war, Sheeran returned home to Pennsylvania, where he took a job as a driver for the Buffalino crime family and befriended mob boss Russell Bufalino (Joe Pesci), who later introduced him to Hoffa.

The Irishman hits theaters Nov. 1 before premiering on Netflix later that month on Nov. 27.