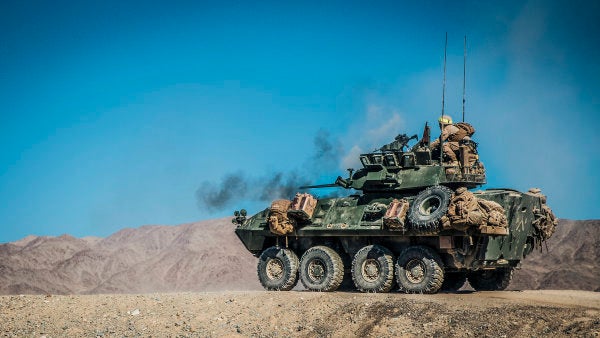 “We have identified a gap in the ability for LAR to provide indirect fire that extends further than their current capability,” he said. “What we are looking to do is provide them with an organic indirect-fire capability that can reach out to extended ranges.”

“This would give them the ability to provide support to the platoon at ranges significantly greater than … what they can currently do with the 81mm mortars,” he said.

The service has scheduled an industry event March 13-14 to discuss possibilities for the program, including an advanced vehicle-launched loitering aerial munition.

“What we are trying to do is make sure we are not developing yesterday's system today, so we are really trying to look forward,” Nebel said, adding that the Marines are looking for small, non-traditional businesses “so we can see, is there something out there that is available that we can incorporate into our capability?”

The Marine Corps also wants to develop a government-owned command-and-control (C2) system instead of going with a vendor proprietary system, he said. That way, vendors can build systems that are designed to work with the government C2 system.

“This would allow us to potentially award contracts to multiple vendors, as opposed to going to a single vendor,” Nebel said.

The Marines hope to award a contract during the first quarter of fiscal 2020 and anticipate some type of a demonstration eight to 12 months later, he said.

From there, the Corps would buy a small quantity to field in the first quarter of fiscal 2022, Nebel added. “We would field an initial capability, and then continue to build upon that capability to really make the best use of innovation,” he said.