Marine rifle squads are getting their hands on upgraded night vision goggles, which are expected to offer "exponential" increases in lethality, the Marine Corps said in a statement. 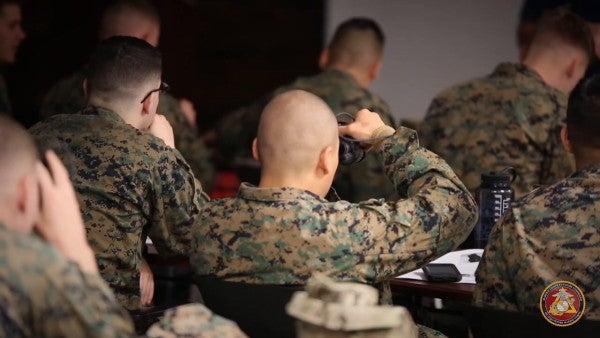 Marine rifle squads are getting their hands on upgraded night vision goggles, which are expected to offer “exponential” increases in lethality, the Marine Corps revealed in a statement.

“It's a little bit lighter than the current system, and gives Marines better depth perception when they are performing movements,” Joe Blackstone, the head of the Optics team at Marine Corps Systems Command explained.

Marines first began taking delivery of the new equipment at Camp Lejeune in North Carolina last month. The infantry has been training with the goggles, learning how to operate and maintain the new night vision devices.

The binocular goggles are expected to make the Marines deadlier in the dark, as they offer far more benefits than the monocular devices. “The lethality that it'll bring is exponential,” Cpl. Zachary Zapata, one of the Marines who participated in the recent training, said.

“With these new , having the ability to not only use thermal optics along with it, but just the entire depth perception and speed that we can operate in is going to significantly increase, as opposed to what we were able to do in the past,” he added.

A Marine peers through the lens of the Squad Binocular Night Vision Goggles during new equipment training in December 2018 at Camp Lejeune, North Carolina

While only the Marine Rifle Squad has received the new night vision goggles, the plan is to eventually deliver this technology to the entire Ground Combat Element. “This program office is committed to bolstering the combat lethality, survivability, resilience and readiness of the GCE,” program officials explained.

The Marines are working with the Army on next-level night vision.

Together with a new integrated weapon sight being developed by BAE Systems, soldiers will eventually be able to shoot from the hip and around corners. Ground forces will be able to “rapidly acquire and engage targets in all light levels and conditions,” BAE Systems representatives told Business Insider last fall.

WATCH NEXT: The Army's Newest Night Vision Goggles In Action