Coming to recruit training near you: American-made standard-issue sneakers 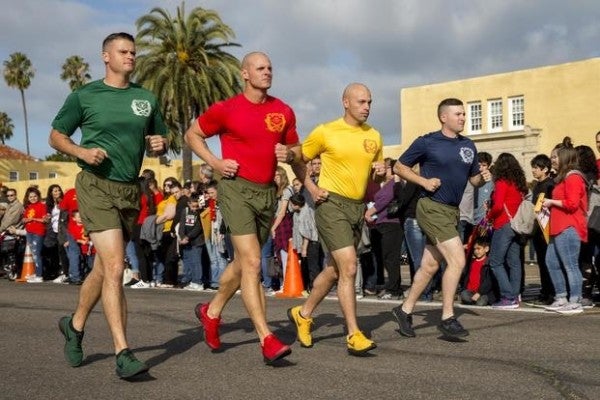 Coming to recruit training near you: American-made standard-issue sneakers.

After a lengthy and sometimes divisive process, the Pentagon's Defense Logistics Agency has begun delivering athletic shoes made by three American manufacturers to the military services for issue during entry-level training.

The Air Force, the first to receive the new shoes, began issuing them to its recruits Jan. 2.

According to a DLA release, the Navy will be the next to get the shoes this spring, followed by the Army and Marine Corps at the end of the year.

Sneakers are becoming standard-issue for the first time across the Defense Department services following a provision in the 2017 defense budget requiring the military to provide American-made athletic shoes free of charge. Previously, throughout the years, a variety of arrangements were reached to get troops their go-fasters: services would issue the shoes individualls, or let troops buy them with a provided allowance or their own money.

A 2016 legislative fight erupted over bill language that would limit the service's footwear options to New Balance sneakers. The limitation was the result of wording that required all components of the shoes to be domestically made, a stipulation that it appeared only the Boston-based New Balance met.

Ultimately, however, three contracts were awarded. In addition to New Balance, San Antonio Shoemakers and Propper Footwear were tapped to provide the shoes.

On average, the shoes, black with slightly different style features, cost just over $90 per pair.

Each company will make and deliver three different varieties of shoes, designed to military specification, DLA spokeswoman Mikia Muhammad told Military.com. The cushion/neutral variant is designed for troops with high arches; the stability shoe variant accommodates medium arches and moderate pronation; and the motion-control variant is best for those with low arches.

With the three variants and an array of 100 men's sizes and 40 women's sizes, according to releases, the distribution agency says troops should face no lack of choice to suit their needs.

“Recruits now have more variety in lengths and widths than any commercial athletic shoe in the world,” Air Force Col. Melvin Maxwell, DLA's director of Clothing and Textiles, said in a statement.

Muhammad said the number of shoes each service receives will depend on their demand. According to a released distribution schedule, the Navy will get the new shoes delivered to the service's only boot camp in Great Lakes, Illinois, in April. The Army and Marine Corps will receive the shoes at all entry-level training facilities in October.

The Coast Guard, the only service that currently issues athletic shoes to troops, will phase in the new shoes as it depletes its current stock of sneakers, the DLA said. The phase-in will begin this month at boot camp in Cape May, New Jersey.

In all, some 250,000 go-fasters will be distributed to recruits every year going forward.

“The athletic footwear program is a positive development for the U.S. clothing industry, offering additional manufacturing opportunities,” Army Brig. Gen. Mark Simerly, DLA Troop Support commander, said in a statement. “From the time the requirement was generated, to production of the shoes, to delivering to our troops, this has been an outstanding example of industry's responsiveness and support.”

SEE ALSO: The Army Is Finally Testing New Combat Boots After Thousands Of Soldiers Complained About Their Current Pair