The Navy is considering building a 14-foot flood wall around the Washington Navy Yard to protect the historic complex along the Anacostia River from rising sea levels, internal Department of Defense documents show 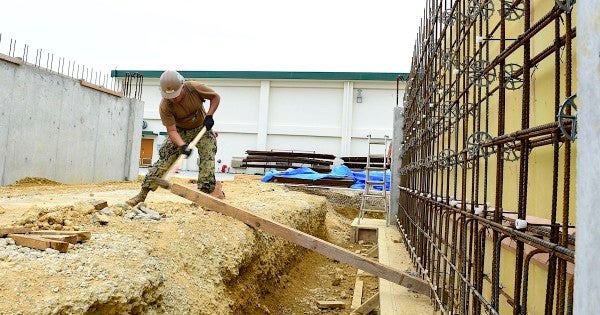 WASHINGTON — The Navy is considering building a 14-foot flood wall around the Washington Navy Yard to protect the historic complex along the Anacostia River from rising sea levels, internal Department of Defense documents show.

Military engineers proposed the wall in a study, obtained through a public-records request, that describes a structure as long as 1.5 miles, to protect three dozen buildings at a cost of as much as $20 million. It's the latest example of a federal agency getting ready for climate change, despite the Trump administration's public dismissal of the threat.

The department has been considering a wall at the sprawling complex — which sits on a revitalized waterfront in the nation's capital — since at least September 2016. That's when it invited Andrew Lewis, a historic preservation specialist with the District of Columbia's planning office, to visit the Navy Yard and discuss the idea. Lewis says he told officials that his office generally preferred to avoid building in front of historic structures.

“It's likely that something like that would have an adverse effect,” Lewis said in a phone interview Thursday. He said that whether the city would oppose the project would depend on the specifics, such as the material used for the wall, its exact route and what steps the department took to respond to concerns.

Established in 1799 as a shipbuilding facility and port, the Navy Yard is the service's oldest installation. It was later used for making ordnance, before getting turned into an administrative center after World War II. It now houses the Chief of Naval Operations, the Navy's highest ranking officer, as well as the Naval Facilities Engineering Command, the Judge Advocate General and the Navy Inspector General.

Looking west from the 11th Street Bridges at the Anacostia Waterfront in Washington, D.C., in the United States. The destroyer museum ship USS Barry is to the right, docked at the Washington Navy Yard. In the distance is Nationals Park, the home stadium of the Washington Nationals Major League Baseb(Flickr/Tim Evanson)

In January, the Defense Department released a list of military installations around the country that were threatened by the effects of climate change. The Washington Navy Yard was one of 19 the Navy identified as being at risk of recurrent flooding. Others include facilities in Key West, San Diego, Pearl Harbor and Guam.

“The Navy's been at the forefront of paying attention to these issues, and that's as it should be,” said John Conger, who was assistant secretary of defense for energy, installations and environment under President Barack Obama and now directs the Center for Climate & Security. Compared with the climate risk facing other branches of the military, he said, “the Navy's got the biggest problem.”

The Navy has been public about the threats if faces from climate change. In 2017, the facilities command published a “handbook” for climate change resilience and adaptation, instructing Navy planners to “identify and assess adaptation action alternatives to manage potential impacts to current and planned infrastructure.”

The wall proposal also demonstrates the threat that climate change poses to Washington itself, and the difficulty of responding to that challenge. The Navy Yard is less than two miles southeast of the U.S. Capitol, and just east of the stadium where the Washington Nationals play. The area is also home to new condominiums and office buildings, along with high-end shops and restaurants.

The Naval Facilities Engineering Command document, dated Feb. 27, 2018, and based on a flood risk management study prepared for the Navy by the U.S. Army Corps of Engineers, found that a so-called 10-year storm — one with a 10 percent chance of happening in any given year — would cause 7 feet of flooding at the Navy Yard. A 100-year storm would bring 10.5 feet, and a 500-year storm 14 feet of flooding.

Those flood risks will only get worse. The study points out that sea levels are expected to increase 1.3 feet by 2035, and as much as 2.6 feet by 2065. It proposes five options to protect the Navy Yard; four of those options entail surrounding most of site with a permanent wall, as well as pump stations to move whatever water makes it over or around the wall.

Robin O'Connell, director for sustainability and land use planning at the Naval Facilities Engineering Command, said in a statement that the proposals described in the document are recommendations for the Navy Installations Command to consider.

Among the advantages the study lists for building a flood wall around the complex are “aesthetic benefits (many types of facades for wall)” and “low maintenance needs.” It proposes a wall with two parts: a permanent 9.5-foot section, topped by removable panels that would rise to 14 feet.

The disadvantages include “high cost of construction,” “may block views” and “alters local hydrology” — a reference to the fact that walls can increase the flood risk to neighboring properties, which in this case includes much of Washington's Southeast waterfront.

Larry Larson, a senior policy adviser with the Association of State Floodplain Managers, called it a “reasonable assumption” that a wall would make nearby structures more vulnerable to flooding. The important question, he said, is whether the Navy has analyzed what the impact would be to those other properties.

If the Navy decided that a wall was too problematic, the study suggests its other options are limited. The only proposal that doesn't involve a wall is to try to flood-proof existing buildings with a mix of waterproof doors and windows, elevating structures and other changes.

Among the disadvantages identified with that approach: “Property still flooded.”

WATCH NEXT: The Nitty-Gritty Of Arctic Warfare