Capt. Rosemary Mariner, who die on Jan. 24 at age 65, was an unintentional pioneer whose many firsts helped lay a foundation for thousands of military women 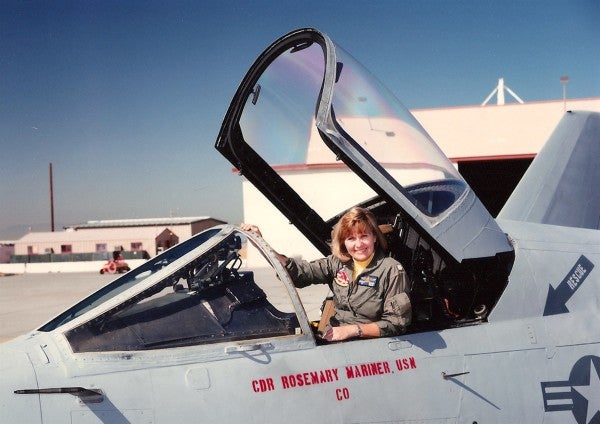 Until this week, Uttecht, commanding officer of Strike Fighter Squadron 32, the Naval Air Station Oceana-based “Fighting Swordsmen,” hadn't given much thought to yesterday's policies or women like Capt. Rosemary Mariner who fought for her ability to be there.

“I did not know who was behind it,” Uttecht said. “I didn't know what women had been fighting for that.”

Mariner, 65, died Jan. 24. A sort of unintentional pioneer whose many firsts helped lay a foundation for thousands of military women, she will be honored with the Navy's first all-female Missing Man flyover during a memorial service Saturday afternoon outside Maynardville, Tenn.

Uttecht is among nine Oceana aviators and naval flight officers traveling to Tennessee for the four-jet formation, an aerial salute in which one aircraft flies off to signify the passing of an aviator. The formation includes a combination of single and dual-seat F/A 18 E and F Super Hornets and it is being supported by more than two dozen female sailors, also from Oceana, who work on the aircraft.

Mariner was born in Texas but grew up in the shadow of Naval Air Station Miramar in California. Her father, an Air Force pilot, was killed in a crash when she was 3 years old, and her mother was a Navy nurse, according to her obituary. Mariner began flying at 15 and soloed at 17, the same year she entered Purdue University, where she was the first woman to graduate, at age 19, with a degree in aeronautics.

A newspaper story about Chief of Naval Operations Adm. Elmo Zumwalt's decision to open pilot training to women shifted Mariner's thinking from commercial airlines, which had also been traditionally closed off to female pilots, to the military.

Mariner was among eight women picked by the Navy to train as pilots and in 1974, earned her wings of gold. Retired Navy Capt. Mary Louise Griffin attended officer candidacy school with Mariner and was chosen as an alternate to that first group of women. Mariner had a knack for finding people within the Navy and civilian worlds to advise her along her path, Griffin said.

“She wasn't doing anything for her personal glory,” Griffin said. “Somebody had to be first.”

In 1974, Mariner became the first female pilot to check in to Naval Air Station Oceana's Composite Squadron 2. She first flew a propeller-driven S-2 Tracker before moving up to the A-4 Skyhawk jet a year later.

A Virginian-Pilot story in 1976 noted the then-22-year-old's knack for firsts. Mariner seemed to brush them aside.

“I'd rather be recognized on my merits,” she told a reporter.

Mariner later became one of the first women to serve aboard the USS Lexington, a training aircraft carrier, and completed 17 “traps” or arrested landings. During the Gulf War, Mariner again notched another first, this time becoming the first woman to command a naval aviation squadron.

By the early 1990s, Mariner and other female pilots began to organize to end rules keeping women from combat roles, and she helped lobby Congressional members, according to her obituary. But the change came too late for her. She retired in 1997 and went on to teach U.S. military history at the University of Tennessee from 2002 until 2016.

Women still account for slim percentages among Navy pilots. According to Navy Personnel Command, there are 556 female pilots, or about 8 percent, out of a total 6,940 across all naval airframes. Among jet pilots, females account for 36 out of a total 1583, or just a little more than 2.2 percent. That number does not include naval flight officers, who operate advance systems aboard an aircraft.

Mariner's naval career in Hampton Roads may have been brief — after Oct. 1976, her career was spent between duty stations in Florida, Texas and California, according to a Navy biography — but the legacy she left has been mighty.

Because of her, today's generations may worry less about what's not possible, some of the women noted. After all, Lt. Christy “Buzz” Talisse, of VFA-211, the “Fighting Checkmates,” said, a fighter jet doesn't know the difference between a man or woman.

“Because of Captain Mariner all of us are fortunate enough to stand here in these uniforms,” Lt. Kelly “Ston'er” Harris, of VFA 213, the “Blacklions,” said. “She was able to blaze the trail for us and so today and for years to come, decades to come, her history and her legacy will live on in us and for future naval aviators.”

As for what Mariner might think of the flyover in her honor and what she might say to the pilots?

Mariner is survived by her husband, Tommy, a retired Navy commander, and a daughter, Emmalee.