The Navy Is On The Hunt For Robot Warships

Cheaper to build than today ship's and expendable, the unmanned vessels could help the Navy quickly to grow — and could allow the fleet to develop new tactics for battling a high-tech foe 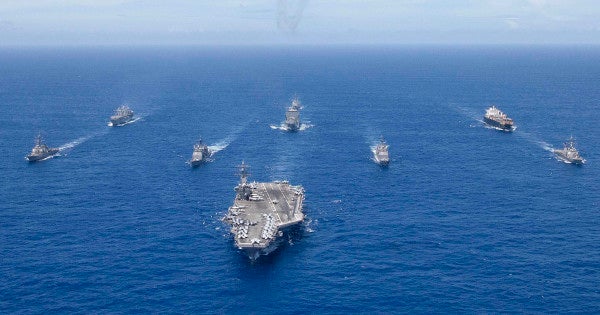 The U.S. Navy is considering developing robotic warships. Cheaper to build than today ship's and expendable, the unmanned vessels could help the Navy quickly to grow — and could allow the fleet to develop new tactics for battling a high-tech foe.

The Navy has done “a lot of work … over the last six or seven months” preparing to formalize programs for large, remotely-operated vessels, Rear Adm. William Galinis, the Navy's executive for surface ships, told the Surface Navy Association on Jan. 17, 2019.

“We've got a set of we're going to be putting out here probably in the next few days to industry to really start that process, put some proverbial meat on the bones,” Galinis said, according to Breaking Defense , a trade publication.

One is a medium-size unmanned surface vessel around the size of the Defense Advanced Research Agency's 132-feet-long experimental Sea Hunter robot ship. The medium USVs “will act as scouts and decoys, carrying sensors and jammers,” Breaking Defense reported.

“If their radio and radar emissions draw enemy fire, well, they were relatively cheap and there's nobody aboard to get killed,” the publication quipped.

There's also a larger USV around the size of conventional corvette, which Breaking Defense claimed would “provide additional punch, loaded with missile launchers but relying on other vessels to find the enemy and relay targeting data.”

The Navy wants to award a contract by 2023 for a large USV, Rear Adm. John Neagley, the Navy's executive for unmanned and small warships, told Breaking Defense.

Sea Hunter helped DARPA and the Navy to hone their thinking about robotic ships. Sea Hunter launched in 2016 and, over the next two years, ran experiments under the Defense

“I have been waiting for this day for a long time,” then-deputy secretary of defense Bob Work said at Sea Hunter's christening ceremony in Portland in 2016. “We are in a period of incredible technological flux.”

Work compared the unarmed Sea Hunter to the U.S. Air Force's remote-controlled Predator drone, which entered service in 1995. Over the next two decades, the initial, weapon-less Predator design evolved into larger, more capable, armed robotic aircraft with more autonomy such as the Air Force's Reaper and the U.S. Army's Gray Eagle.

By comparison, Sea Hunter boasted relatively high performance even in its experimental form. Sea Hunter reached a top speed of 27 knots, which is faster than any conventional submarine can travel. It could sail as far as 10,000 nautical miles at 12 knots.

While Sea Hunter ran trials, the U.S. naval community arrived at a new consensus. That with just 275 frontline ships, the Navy was too small to maintain a forward presence across the world's oceans, deter Russia and China and support combat operations in the Persian Gulf and Central Asia.

Obama's navy secretary Ray Mabus conducted a force-structure analysis that called for 355 ships. “All of the analysis done to date, inside and outside of the Navy, recognizes, as we have for nearly the last eight years, the need for a larger fleet,” Mabus wrote in late 2016.

Both the Obama and Trump administrations endorsed a 350- or 355-ship navy. Congress codified a 355-ship Navy in the 2018 defense authorization act.

But turning the idea of a bigger fleet into an actual bigger fleet proved difficult. One Congressional shipbuilding expert told The National Interest on condition of anonymity that quickly growing the Navy by 75 ships simply by buying new vessels “would be impossible.”

Adding at least 75 vessels during a hypothetical, two-term Trump presidency lasting eight years would require the administration to plan for, and Congress to fund, as many as 15 new ships every year — six to replace older ships in the process of decommissioning plus another nine to actually expand the fleet.

Manufacturing and maintaining the extra ships could cost as much as $23 billion a year, according to a 2017 report from the Congressional Research Service. For years, the Navy's annual shipbuilding budget has been around $15 billion.

Richard V. Spencer, Pres. Donald Trump's nominee for Navy secretary, tried to walk back the 355-ship goal during his July 2017 confirmation hearing. “What I will tell you is that whether it's a 355-ship or not, what we also want to get our head around is, can we have a capacity number but have a capability that's even greater than that, have the capability of a 355- that might be a 300-ship Navy,” Spencer said.

Robotic ships could help to solve the Navy's growth problem. “Part of the value of having unmanned surface vehicles is you can get capacity at a lower cost,” Neagley said. An operational version of Sea Hunter would cost just $20 million, Breaking Defense reported.

By contrast, the Navy expects to spend around a billion dollars apiece for new, manned frigates.

Robotic ships also are cheaper to operate than manned ships are. Sea Hunter cost around $20,000 per day to maintain, according to DARPA. A manned destroyer costs hundreds of thousands of dollars per day.

Robotic vessels' low cost is a powerful argument in their favor. Still, it's an open question whether the Navy succeeds in developing all the unmanned warships it's currently studying.

But two years ago, standing before Sea Hunter , Work made a bold prediction. “Make no mistake, in the future ships like this one will be fighting ships and we will intend to take them into harm's way.”