The new acting secretary of the Navy said recently that he is open to designing a fleet that is larger than the current 355-ship plan, one that relies significantly on unmanned systems rather than solely on traditional gray hulls 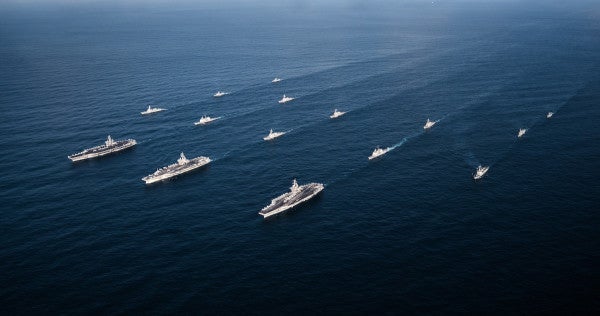 The new acting secretary of the Navy said recently that he is open to designing a fleet that is larger than the current 355-ship plan, one that relies significantly on unmanned systems rather than solely on traditional gray hulls.

Modly spoke of the possibility that the Navy may need more than the often-debated 355-ship fleet at a Dec. 5 U.S. Naval Institute defense forum.

“We need to think about what 355 means; if 355 is not the right number, we ought to know what the right number is, and we ought to be lobbying for that and making a case for it and arguing in the halls of the Pentagon for a bigger share of the budget if that is what is required,” he said.

Both the Navy and Marine Corps are finalizing the new force structure assessment, which Modly expects to be published no later than Jan. 15, the memo states.

The last time a naval force structure assessment was completed was 2016; it influenced the current 30-year shipbuilding plan, Adm. Michael Gilday, chief of naval operations, said at the Dec. 5 forum.

In addition to the increased demand for Navy and Marine Corps cooperation, the force structure assessment will place a significant focus on unmanned systems, Gilday said.

“Typically, force structure assessments are focused on programs of record, but I know that the future fleet … has to include a mix of unmanned,” he said. “We can't continue to wrap $2 billion ships around 96 missile tubes and think we can do that in the numbers that we need to in order to fight in a distributed way against a potential adversary that is producing capability and platforms at a very high rate of speed.”

Details are still taking shape, but Gilday said the Navy is going to need a future fleet made up of manned and unmanned air, surface and undersea vessels.

“I think there is going to be a requirement to continue to deliver seaborne-launched vehicles through the air that will deliver an effect down range. … That will likely be a mix of manned and unmanned; the platform from which they launch from — I'm not sure what that is going to look like,” he said. “We need the right mix of both surface and undersea , unmanned and manned.”

The INFSA will also look at different ways to coordinate the assets of both the Marine Corps and the Navy to find newer, non-traditional methods to accomplish missions, officials say.

“I am in support of the fleets; that is what the commandant called on us to do,” he said, describing how Marine ground forces are capable of providing long-range anti-ship fires.

“I already shoot a missile 200 miles; it just happens to be an Army [Tactical Missile System],” Smith said. “As the littoral maneuver guy, I would assume that my missiles would be able to strike a ship instead of just a land-based target.”

The Marine Corps successfully fired a High-Mobility Artillery Rocket System off an amphibious ship in 2017 as part of a series of tests. Service officials have repeatedly called long-range fires a priority for the service.

This way of thinking is critical to the effectiveness of the future fleet, Vice Adm. James Kilby, deputy chief of Naval Operations for Warfighting Requirements and Capabilities, said at the forum.

“Typically, we talk about Marines influencing into land; we don't think about them influencing the sea, so if some of that load share can be spread, then I can use ships in a different manner than I would in the past,” Kilby said.