The Pentagon is working with its Defense Intelligence Agency to declassify and release images — including two traditional sailing vessels carrying land-attack missiles — to back up the Trump administration's claims of a growing threat from Iran, according to four defense officials 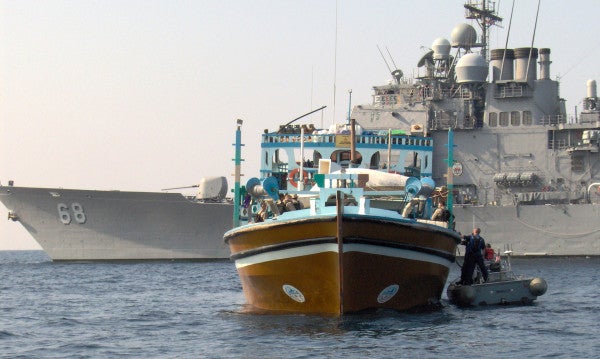 WASHINGTON — The Pentagon is working with its Defense Intelligence Agency to declassify and release images — including two traditional sailing vessels carrying land-attack missiles — to back up the Trump administration's claims of a growing threat from Iran, according to four defense officials.

The evidence may be released within a day, according to one of the officials, because the White House recognizes it needs to disclose more documentation to skeptical allies, U.S. lawmakers and the public.

These include images of the two dhows, slow-moving vessels that U.S. analysts believe were carrying cruise missiles that are designed to attack land targets and would be fired directly from the boats rather than shipped to other locations, according to one of the defense officials.

The vessels could be easily disguised among the many dhows that transit the Persian Gulf in routine commerce — unlike the easily spotted speedboats that Iran's Islamic Revolutionary Guard Corps has long used to intimidate crews of oil vessels from other nations and occasionally to harass American ships in the Persian Gulf.

The two dhows were among the “threat streams” from Iran that the U.S. detected in the two weeks since General Kenneth McKenzie, head of U.S. Central Command, alerted Acting Defense Secretary Patrick Shanahan, one of the officials said. The Iranian military also has been seen moving around the country more than usual.

Another official said that the potential Iranian threats also include moving land-based missiles into position to fire on U.S. troops in Iraq, with drones spotting targets or attacking as well.

The Pentagon has hastened the deployment of an aircraft carrier and sent a Patriot anti-missile battery to the region while the State Department announced the withdrawal of some diplomatic personnel from Iraq.

B-52H bombers — equipped with stand-off weapons that let them stay out of Iranian airspace — recently arrived in the region and are conducting “deterrence patrols” over the Arabian Sea, according to one of the officials. Separately, F-35A stealth fighters are conducting “counter-air” patrols in the region, on watch for Iranian fighter activity.

Shanahan told a Senate panel last week that evidence of a heightened threat from the Islamic Republic is “very, very credible.” But U.S. allies have openly expressed doubts. This week, the Pentagon disavowed comments from the British deputy commander of U.S-led operations in Iraq and Syria that “there's been no increased threat from Iranian-backed forces.”

Members of Congress have invoked the false U.S. intelligence claims that Saddam Hussein had weapons of mass destruction before the invasion of Iraq in 2003, adding to the pressure to produce evidence now to back up assertions that classified intelligence shows increased danger from Iran and its proxy forces in the Middle East.

House Speaker Nancy Pelosi warned the administration Thursday against taking military action in Iran without authorization from Congress. “The responsibility in the Constitution is for Congress to declare war,” she told reporters. “So I hope that the president's advisers recognize that have no authorization to go forward in any way.”

As always, though, there's concern about revealing U.S. intelligence-gathering methods and prowess, an official said. Still, it's well-known that the U.S. 5th Fleet has flown P-8 Poseidon surveillance aircraft in the region since 2016, with missions spanning the Strait of Hormuz, the Gulf of Oman and the Red and Arabian Seas.

Trump campaigned for president on a pledge to avoid costly entanglements in foreign military conflicts like the wars in Iraq and Afghanistan. But he also pledged to take on Iran as a supporter of terrorism and denounced the 2015 nuclear deal with the Islamic Republic, which he quit last year.

Iran's fast-attack small boats are equipped with torpedoes, short-range antiship missiles or both, and can reach speeds of 40 to 50 knots. From 1996 to 2006, the Revolutionary Guards received about 46 fast-attack boats from China and North Korea, the Office of Naval Intelligence disclosed in a 2017 publication. Four of the boats approached within 300 yards of the USS Nitze destroyer in August 2016 with uncovered weapons, U.S. defense officials said at the time.

As president-elect, Trump vowed a more aggressive response to such Iranian harassment of U.S. vessels. “By the way, with Iran, when they circle our beautiful destroyers with their little boats and they make gestures at our people that they shouldn't be allowed to make, they will be shot out of the water. OK?” Trump said at a campaign rally in Florida in September 2017. “Believe me.”

The Trump administration “appears to be more comfortable than its predecessors in using military tools — short of the overt use of force — to achieve its strategic objectives,” Kathleen McInnis, a defense strategy analyst withe the Congressional Research Service, said in an email.

While the latest moves may be intended to deter Iran even as the regime remains under strict U.S. sanctions, she said “there is always the risk of miscalculation and escalation on either side when military force is part of the equation.”

Trump told reporters “I hope not” when asked on Thursday about the prospects of going to war with Iran. In tweets on Wednesday, the president denied there's “infighting” within his administration over Iran and said “I'm sure that Iran will want to talk soon.”

SEE ALSO: Asked If The US Is Going To War With Iran, Trump Says, 'Hope Not'