The Philippines cancels major security pact with the US

Philippine President Rodrigo Duterte scrapped a two-decade-old defense agreement with the United States on Tuesday, throwing one of Washington's most important security alliances in Asia into disarray 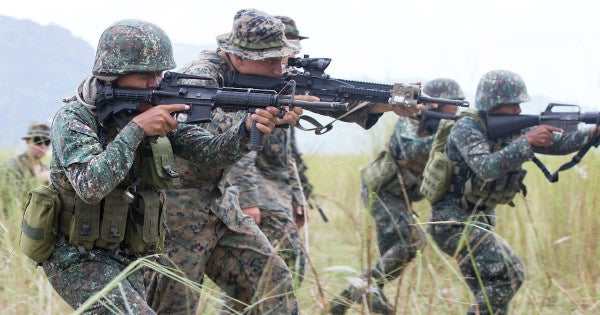 MANILA, Philippines — Philippine President Rodrigo Duterte scrapped a two-decade-old defense agreement with the United States on Tuesday, throwing one of Washington's most important security alliances in Asia into disarray.

The termination of the Visiting Forces Agreement — which allows for joint military exercises and facilitates the movement of U.S. defense personnel and equipment in the Philippines — was the culmination of weeks of threats by the mercurial Duterte, who has chafed at U.S. criticism of his human rights record while pursuing closer ties with China and Russia.

Duterte's spokesman, Salvador Panelo, said Duterte told the U.S. Embassy in Manila in a letter on Tuesday that he intended to terminate the agreement, which would expire in 180 days unless both nations decide to keep it.

“As the president said, it's about time we rely on our own resources,” Panelo told a news conference. “We have to strengthen our own capability as a country relative to the defense of our land.”

U.S. officials say the pact, which went into effect in 1999, is crucial to the nearly 300 joint military exercises the countries conduct every year and has allowed U.S. troops to assist in counter-terrorism and humanitarian operations in the archipelago nation, a former U.S. colony.

“This is a serious step with significant implications for the U.S.-Philippines alliance,” the U.S. Embassy in Manila said in a statement. “We will carefully consider how best to move forward to advance our strategic interests.”

The Pentagon sees its relationship with the Philippines as a bulwark against China's growing military ambitions in Southeast Asia. Beijing has built naval installations in the contested waters of the South China Sea and expanded security cooperation with authoritarian governments in Thailand and Cambodia, among other countries.

But tensions escalated in recent weeks following the disclosure that the U.S. had revoked the visa of a Philippine senator, Ronald dela Rosa, a former police chief who presided over Duterte's bloody anti-drug campaign that left thousands dead.

Although no official reason was given for the visa cancellation, Dela Rosa said he believed it was due to his role in the drug war.

Before that, Duterte had banned three U.S. senators — Democrats Richard J. Durbin of Illinois, Edward J. Markey of Massachusetts and Patrick J. Leahy of Vermont — from visiting the Philippines after they called for the release of a Philippine lawmaker who was jailed after she spoke out against extrajudicial killings in the drug war.

The three have also sponsored a proposal before the Senate that would ban any Philippine official involved in the “wrongful imprisonment” of the lawmaker, Leila de Lima.

By canceling the Visiting Forces Agreement, analysts said Duterte, who has denied wrongdoing in the drug war, signaled that he was willing to sacrifice the country's most crucial strategic alliance in order to protect himself and his allies from accountability for the killings.

“It's a very audacious, risky and even reckless move by Duterte,” said Richard Heydarian, a political analyst in Manila. “It's the first time we've seen a full frontal assault on an alliance with a country that has a tremendous degree of residual influence over both the Philippine military as well as other centers of power.”

Duterte's decision came over the objections of senior officials in the Philippines' security establishment, some of whom were educated in the United States and regard the alliance as a cornerstone of the country's national security. Before the announcement, Duterte's defense secretary, Delfin Lorenzana, had dismissed reports that the pact would be canceled as “fake news.”

Pentagon officials describe the agreement as a crucial part of a 1951 mutual defense treaty — under which the U.S. pledged to defend the Philippines if it was attacked — because it allows for the free entry of U.S. soldiers, military aircraft, vessels and supplies.

In a teleconference with reporters before Duterte's announcement, R. Clarke Cooper, a senior State Department official, said that canceling the agreement could reduce joint military exercises, the number of U.S. troops available to train Philippine forces and the frequency of U.S. naval patrols in the South China Sea — one of the key deterrents to China's widening territorial claims in the waters.

“There is a significant amount of resources that had been invested in that bilateral relationship, and … I don't think anyone in the government of the Philippines would want to put at risk the numerous engagements,” Cooper said.

Although Duterte has a friendly relationship with President Donald Trump — who once said the Philippine leader was doing “an unbelievable job on the drug problem” — he has repeatedly criticized the U.S. for meddling in his country's internal affairs.