The Pizza MRE Is Finally Coming

Close your eyes. Now, think of the most delicious food imaginable. If you’re picturing, say, a hamburger or a bowl … Continued 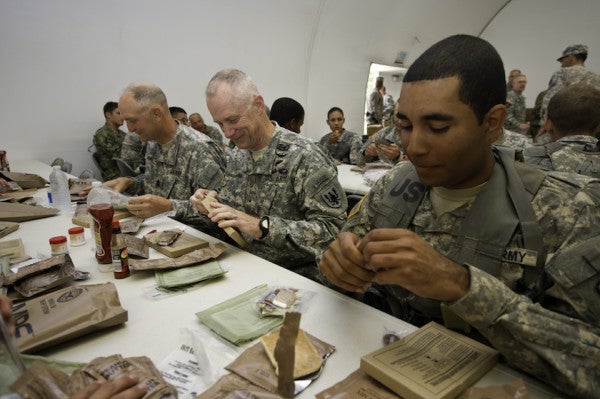 Close your eyes. Now, think of the most delicious food imaginable. If you’re picturing, say, a hamburger or a bowl of mom’s spaghetti, you’re wrong. It’s pizza. Or, as it will soon be known in the military, Meal, Ready-to-Eat No. 37.

That’s right. According to Tech Insider, a U.S. Army laboratory has just successfully concocted the first ever field-ready slice. And guess what? It’s the real deal.

“It’s a fully assembled and baked piece of pizza in one package,” Lauren Oleksyk, a food technologist at the U.S. Army’s research, development, and engineering center in Natick, Massachusetts, told Tech Insider.

But unlike a normal, civilian slice of pizza, this one is infused with something called Hurdle technology, which prevents mold from forming and allows the MRE to remain edible for three years at 80 degrees. In other words, if the Terminator were a slice of pizza, this would be it.

RELATED: 7 guys you meet in every infantry platoon »

According to Oleksysk, soldiers can expect the slice to taste like “day after pizza” or the ’za commonly found in school cafeterias across America. As true pizza fans know, those are two of the very best varieties.

“We’ve actually had feedback from the warfighter for years,” Oleksysk said. “Pizza just seems appealing to all.”

Damn right it is.

MRE No. 37 is scheduled to make its debut sometime in 2017, at which point deployments will get exponentially more delicious. Until then, everyone will just have to keep fighting over Chili and Macaroni.