The Space Force Awakens: Trump Orders DoD To Make It So

President Trump wants a new branch of the military to seek out new and new civilizations and boldly kill what... 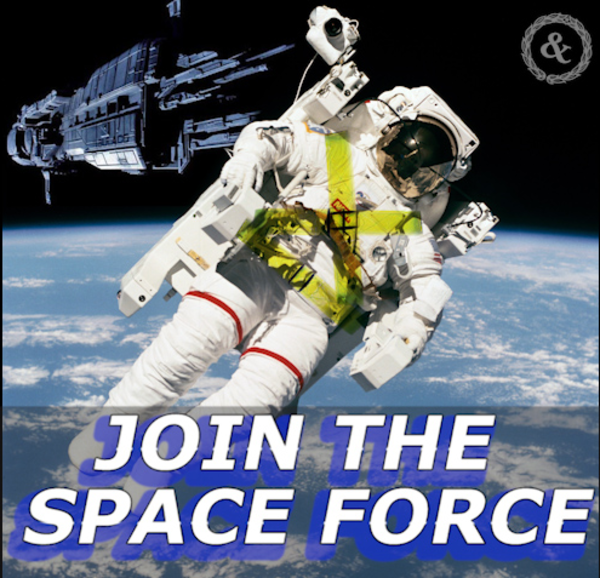 President Trump wants a new branch of the military to seek out new and new civilizations and boldly kill what no U.S. troops have killed before.

The president has talked about the need for a separate branch of the U.S. military to focus just on space, but on Monday he went a step further and expressly ordered Marine Gen. Joseph Dunford, chairman of the Joint Chiefs of Staff, to create a sixth military branch.

“When it comes to defending America, it is not enough merely to have an American presence in space; we must have American dominance in space,” Trump said Monday at a White House meeting of the National Space Council. “Very importantly, I am hereby directing the Department of Defense and Pentagon to immediately begin the process necessary to establish a Space Force as the sixth branch of the armed forces.

Trump then turned to Dunford, who was standing behind him, and asked, “Got it?”

“We got it, sir,” Dunford replied.

“Let’s go get it, general,” the president said.

Creating a new military branch would require an act of Congress, lawmakers will have the final say on whether Space Force becomes a reality.

The Defense Department understands what the president wants and the Pentagon’s policy board will begin working with Congress on this matter, which has implications for how the other services conduct intelligence operations, chief Pentagon spokeswoman Dana White said on Monday.

“Space is a warfighting domain, so it is vital that our military maintains its dominance and competitive advantage in that domain,” a Joint Staff official told Task & Purpose on Monday. “The Joint Staff will work closely with the Office of the Secretary of Defense, other DoD stakeholders and the Congress to implement the President's guidance.”

With much of the U.S. communications and navigation equipment depending on satellites, it makes sense to create a force that would safeguard space assets against Russian and Chinese lasers and killer satellites.

Separately, the Pentagon is trying to award a massive contract for a JEDI commercial cloud, which is not expected to be powered by midi-chlorians.

Dunford will have to tackle many issues as he moves forward with standing up a Space Force, including whether the new space troopers will have to wear reflective belts when they PT in zero gravity.

The Pentagon has been mum on what type of uniforms a Space Force would be issued, but Rep. Mike Rogers, a House Republican from Alabama, has suggested going with black versions of the Air Force’s dress blues – a design that would look similar to Imperial officers’ attire whilst stationed on the Death Star.

The U.S. military has already trained to fight “Little Green Men” as part of hybrid warfare, but now troops may have to learn how to kill extraterrestrial life as well. This job would most likely fall to Marines, who are deathly afraid of running out of things on this earth to kill.

UPDATE: This story was updated on June 18 with comment from the Joint Staff.