The Space Force has an official Bible and people are pissed

The U.S. Space Force has designated its own King James Bible for swearing-in ceremonies. Not everyone is happy about it 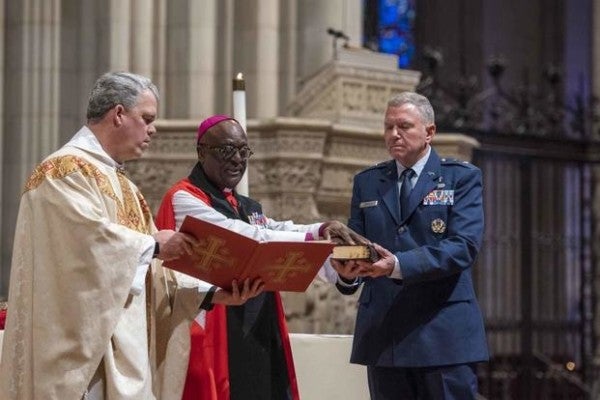 The U.S. Space Force has designated its own King James Bible for swearing-in ceremonies.

On Sunday, religious leaders at the Washington National Cathedral blessed the Bible for the Space Force, which was established as the sixth branch of the U.S. military in December.

“Today @WNCathedral blessed the official Bible for the new @SpaceForceDoD, which will be used to swear in all commanders of America's newest military branch,” according to a Twitter post from the church.

The Right Rev. Carl Wright, the Episcopal Church's bishop suffragan for the Armed Forces and Federal Ministries, offered the blessing as Maj. Gen. Steven Schaick, Air Force chief of chaplains, held the Bible, according to The Washington Post.

It was not immediately clear whether the Bible will be used to swear in every commander who falls under the Space Force, or just its top leaders, such as Gen. John “Jay” Raymond, the first chief of Space Operations. Raymond, who also leads U.S. Space Command, will report to the secretary of the Air Force and sit as a member of the Joint Chiefs of Staff.

Some users and veterans took to Twitter to voice their displeasure with the move, saying that religious texts aren't typically used when officers take an oath of office, though leaderscan opt to do so. Others maintained that, by using the Bible, the Space Force will ostracize commanders and officials who practice a different faith.

“The MRFF condemns, in as full-throated a manner as is humanly possible, the shocking and repulsive display of only the most vile, exclusivist, fundamentalist Christian supremacy, dominance, triumphalism and exceptionalism which occurred at yesterday's 'blessing' at the Washington National Cathedral,” he told Military.com on Monday.

“They must ensure their words and actions cannot reasonably be construed to be officially endorsing or disapproving of, or extending preferential treatment for any faith, belief, or absence of belief,” it states.

He added that the Bible's use violates the “No Religious Test Clause” within Article VI, Clause 3, of the U.S. Constitution. The nondiscrimination clause ensures that federal officeholders and employees are not required to adhere to or accept any particular religion or doctrine in order to serve in their distinct positions.

MRFF will lodge a formal complaint with Defense Secretary Mark Esper on behalf of active-duty and civilian personnel who've contacted the organization since the ceremony, Weinstein said.

“MRFF will be assiduously assisting its clients to also expeditiously make formal Inspector General (IG) and Equal Employment Opportunity (EEO) complaints to the DoD chain of command hierarchy to stop this train-wreck disaster in its stinking tracks from ever even leaving the station,” he said.

He continued, “If MRFF's fervent attempts to exhaust all DoD administrative remedies to eliminate this fundamentalist Christian tyranny and oppression fail, MRFF will plan to stop this matter in Federal court in Northern Virginia. The utilization of a Christian Bible to 'swear in' commanders of the new Space Force or any other DoD branch at ANY level is completely violative of the bedrock separation of church and state mandate of the First Amendment of the U.S. Constitution.”