The United States and Afghanistan clashed publicly on Thursday over U.S. peace talks with the Taliban, with a visiting Afghan official accusing the chief U.S. negotiator of "delegitimizing" the Kabul government by excluding it from the deliberations 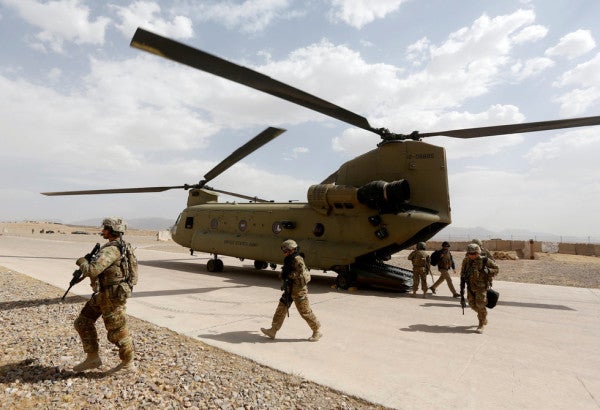 The United States and Afghanistan clashed publicly on Thursday over U.S. peace talks with the Taliban, with a visiting Afghan official accusing the chief U.S. negotiator of “delegitimizing” the Kabul government by excluding it from the deliberations.

The remarks by Hamdullah Mohib, a former ambassador to Washington who serves as Afghan President Ashraf Ghani's national security adviser, drew a blistering rebuke from the State Department, which said they impeded U.S.-Afghan ties and the peace process.

The feud thrust into the open tensions that have been building between the allies over U.S. efforts to forge a peace pact with the Taliban paving the way for a U.S. troop withdrawal that Kabul fears could weaken its own negotiating position.

Mohib leveled a fierce attack on U.S. Special Representative Zalmay Khalilzad's conduct of the talks during a news conference at the Afghan embassy, accusing the Afghan-born veteran U.S. diplomat of a lack of transparency.

“Knowing Ambassador Khalilzad's history, his own personal history, he has ambitions in Afghanistan. He was wanting to run for president twice,” said Mohib. “The perception in Afghanistan and people in government think that perhaps, perhaps all this talk is to create a caretaker government of which he will then become the viceroy.”

Viceroy is a politically loaded term in South Asia as it was the title of the colonial administrator of British-ruled India.

Mohib's comments were the most strident public complaints to date by an Afghan official over the Kabul's government's exclusion from the negotiations.

A second round of U.S.-Taliban talks lasting 16 days ended on Monday in Doha, Qatar. The sides reported progress, but no final deal on a withdrawal of U.S.-led international forces and arrangements that the Taliban ensures militants would not use Afghanistan to stage attacks as al Qaeda did for Sept. 11, 2001.

“We think either Zal, Ambassador Khalilzad, doesn't know how to negotiate (or) there may be other reasons behind what he's doing,” Mohib said.

“The reason he is delegitimizing the Afghan government and weakening it, and at the same time elevating the Taliban can only have one approach. It's definitely not for peace,” he said.

His remarks drew a strong admonition from Under Secretary of State for Political Affairs David Hale. In a meeting with Mohib, Hale rejected his attack on “the U.S. approach to reconciliation,” Robert Palladino, the department's deputy spokesman, said in a statement.

The department's No. 3 diplomat reminded Mohib that Khalilzad represents Secretary of State Mike Pompeo “and that attacks on Ambassador Khalilzad are attacks on the department and only serve to hinder the bilateral relationship and the peace process,” Palladino said.

Hale “expressed our commitment to the Afghan government's stability and full participation in the peace process,” Palladino said.

U.S. negotiators are pressing the Taliban to accept a ceasefire and talks on Afghanistan's political future with representatives of Afghan society, including Ghani's government. But the talks have primarily focused on the Taliban's counter-terrorism assurances and a U.S. troop withdrawal.

The Taliban rejects direct negotiations with the Kabul government, accusing it of being a U.S. puppet.

The lead Taliban negotiator, Mullah Abdul Ghani Baradar, on Thursday assured Afghans that they had no reason to fear a settlement.

Afghan officials worry that Khalilzad's priority is securing at Kabul's expense an end to the nearly 18-year U.S. military involvement to fulfill a pledge President Donald Trump made to end America's longest war.