“I was mostly worried about my friends on the ship and everyone back home, more than if I was going to be sick.” 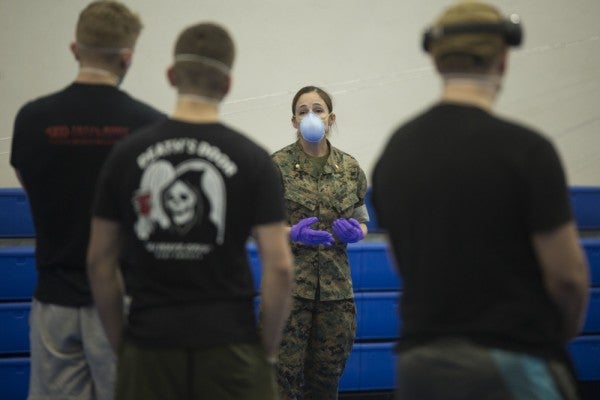 Rachel Beck got good news early this week: She is among at least 3,170 Navy personnel assigned to the USS Theodore Roosevelt who have tested negative for coronavirus infection.

Beck, 24, who is a 2017 Derry Area High School graduate, was evacuated from the aircraft carrier to a house in Guam, along with shipmates who had shared a work area, after covid-19 cases were detected among other crew members.

“I was tested on April 3, and it took about three or four days to get the results back,” Beck said. Then, she and her shipmates were transferred to a hotel, where they began a 14-day quarantine, confined to individual rooms.

Beck, who was asymptomatic, never believed she had contracted the disease because, she said, she tends to have more severe symptoms when she is ill.

“If I was sick, it was going to show up pretty bad. I was mostly worried about my friends on the ship and everyone back home, more than if I was going to be sick.”

Among those whose health she’s worried about during the pandemic are her parents and her 5-year-old goddaughter.

Her mother, Pamela Reese of Latrobe, who is the assistant manager at the Action for Animals Humane Society shelter in Latrobe, had only limited online communication with her daughter while she was aboard the Roosevelt. Now, they can keep in touch by phone.

Even before the outbreak was reported aboard the carrier, Reese was concerned about the threat the virus could pose for her daughter and the roughly 4,800 others sailors on board.

“It scared me,” Reese said. “As a mother, you feel you’re not there to protect them.”

The best message from her daughter by far was confirmation that she’d tested negative.

“I was so relieved,” Reese said. “A close friend’s mom just passed away from (covid-19) complications. It’s sad all around.”

Given the unusual circumstances of the pandemic and the large number of sailors on board, Beck said she has been impressed with the Navy’s efficiency in gradually moving the Roosevelt’s crew off the carrier.

When coronavirus cases first were discovered aboard the vessel, after it departed from a port of call in Vietnam, “we started bleaching everything down as much as we could,” Beck said. “We were able to pull into Guam early, on March 27, and they started swabbing us and mass evacuating us off of the ship.

“The Navy is one big family. Everybody cares about everybody on the ship.”

While cooped up in quarantine, she’s stayed in touch with other members of the Roosevelt crew as well as her family.

“We’ve been calling each other and having Face Time with each other,” Beck said.

She said they’re praying for the crew member who was found unresponsive on Thursday and was transferred to an intensive care unit.

She’s also thinking of Brett Crozier, who has tested positive for covid-19 and was removed as captain of the Roosevelt after a memo he wrote urging speedier evacuation of the carrier was leaked to the public.

“We’re praying for everyone to be safe and heal and recover from this,” Beck said.

To fill her time in isolation, Beck has been watching shows on Netflix and perusing study guides to stay on top of her Navy job. An aviation bosun’s mate, she is charged with maintaining engines for arresting gears that catch planes as they land on the carrier deck.

Beck joined the Navy in 2018, following the example of three male ancestors in her mother’s family.

“I wanted to be part of the fight,” she said, “not just letting my country serve me.”

Beck isn’t sure what will happen after she’s completed her quarantine. The outbreak occurred during a six-month deployment.

Based in San Diego, she said, “We just kind of want to go home at this point.”

Reese is “praying she’s home for her birthday,” in August. “I worry about every one of them on that ship. They put their lives on the line for us. I applaud them and I’m very proud of them all.”