This Marine Veteran Was Investigated For Deportation. He Was Born In Michigan

The ACLU is demanding an investigation after a Grand Rapids-born U.S Marine combat veteran was held for possible deportation 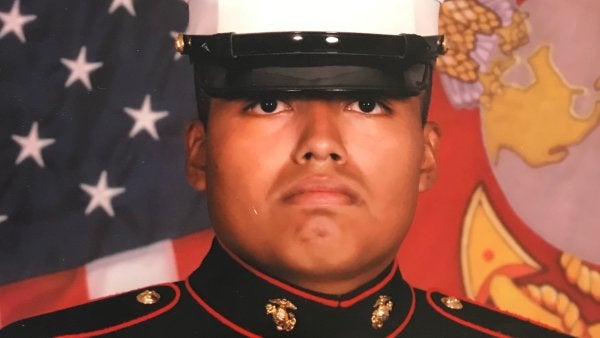 KENT COUNTY, MI – The ACLU is demanding an investigation after a Grand Rapids-born U.S Marine combat veteran was held for possible deportation.

The American Civil Liberties Union said the Kent County Sheriff's Department “delivered” Jilmar Ramos-Gomez to Immigration and Customs Enforcement, or ICE, after his release from jail.

“It is incomprehensible that the Sheriff's Department turned a vulnerable, mentally ill United States citizen over to ICE so that he could be deported from his country – a country for which he fought on the battlefield,” ACLU attorney Miriam Aukerman and others wrote in a statement.

The ACLU and Michigan Immigrant Rights Center sent a letter to Kent County officials demanding an investigation, and information, into Ramos-Gomez's case.

Kent County Sheriff Michelle Young said her agency did not deliver Ramos-Gomez to ICE – federal agents showed up with legal documents placing a hold on him as he was being released from jail.

She said that the jail, as required by law, provides state and federal governments fingerprint information after subjects are booked into the jail. She said that jail officials do not contact ICE about any inmates. She does not believe that Ramos-Gomez told jail officials that he had served in the military.

Ramos-Gomez spent three days in the Calhoun County immigration center before Grand Rapids attorney Richard Kessler, contacted by the Marine's family, got him out.

An ICE spokesman said in an auto-reply email that all public-affairs officers are out of the office because of the government shutdown.

Ramos-Gomez, a lance corporal and tank crewman, served in Afghanistan from 2011 to 2014.

“But when he returned home, he was a shell of his former self, suffering from post-traumatic stress disorder after he had seen,” the ACLU said.

“His family reports that he is focused on returning for his marine brothers in Afghanistan. He has episodes where he disappears and when he is found again, he often has no recollection of where he has been.”

He was arrested Nov. 21 after damaging a fire alarm at Spectrum Health Butterworth Hospital. He also trespassed on the heliport, the ACLU said. He pleaded guilty to trespassing and was to be released on a personal-recognizance bond pending sentencing.

The ACLU says the jail should have released Ramos-Gomez immediately but instead “worked with ICE agents to enable his transfer to an immigration detention center in Calhoun County to start the deportation process.

Public jail records showed that he was subject to an ICE detainer, “and that the jail turned him over December 14, 2018. It is unclear how that was possible or why the jail believed it should hand Mr. Romas-Gomez over to ICE, rather than release him as required by the court order,” the ACLU said.

Kent County's contract with ICE, which includes incarceration fees for ICE detainees, has come under fire.

Protesters demanded the contract be rescinded, arguing that the contract leads to racial profiling, with immigrants who are arrested for minor crimes being exposed to deportation.

“This is exactly the type of incident that advocates have warned could happen,” the ACLU said.

WATCH NEXT: Meet The Men Of Deported Veterans Support House