Some DVIDS uploads come with captions and titles that cut right to the core, perfectly capturing the essence of life in the U.S. military in a way that makes you sigh, facepalm, and utter a mournful, 'too real' 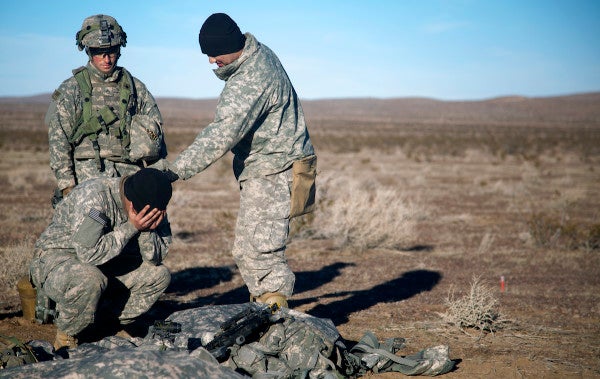 The Defense Visual Information Distribution Service (DVIDS) is the largest official database of U.S. military media available for public consumption. It is also an occasional source of unexpected laughs, like this gem from a live fire exercise that a public affairs officer simply tagged 'Fire mortar boom.' In the world of droll data entry and too many acronyms, sometimes little jokes are their own little form of rebellion, right?

But some DVIDS uploads, however, come with captions and titles that cut right to the core, perfectly capturing the essence of life in the U.S. military in a way that makes you sigh, facepalm, and utter a mournful, 'too real.'

This is one of those photos:

This title is both funny and a bit tooooooo accurate, especially since it shows a soldier from the 3rd Battalion, 21st Infantry Regiment consoling a fellow soldier after spending all night sleeping outside in the cold at the National Training Center at Ft. Irwin, California in January 2017. It will be OK buddy. Thanks for the pep talk, chief.

On the one hand: lol. On the other, the juxtaposition of the photo and title immediately reminded me of this depressing May 2018 essay from the writer and Marine Corps veteran Phil Klay on the crisis of low morale in the ranks of the U.S. armed forces:

Morale is a hard thing to measure, but plenty of indicators suggest that it's been falling. Ninety-one percent of troops called their quality of life good or excellent in a survey done by the Military Times back in 2009, when the downturn in violence in Iraq and a new strategy in Afghanistan still held out a promise of victory; by 2014 that had fallen to only 56 percent, with intentions to reenlist dropping from 72 to 63 percent. Recruiting is also down. For the past three decades, the military has generally accepted about 60 percent of applicants. In recent years that figure has been closer to 70 percent and is climbing. And the active-duty force is getting worn out. When I was in, I was impressed to meet guys with five deployments under their belts. Now I meet guys who have done eight, or nine, or 10.

The beating will continue until morale improves, but at least we'll get some funny DVIDS Easter Eggs out of it!