The war to end all wars isn’t done ravaging the continent. 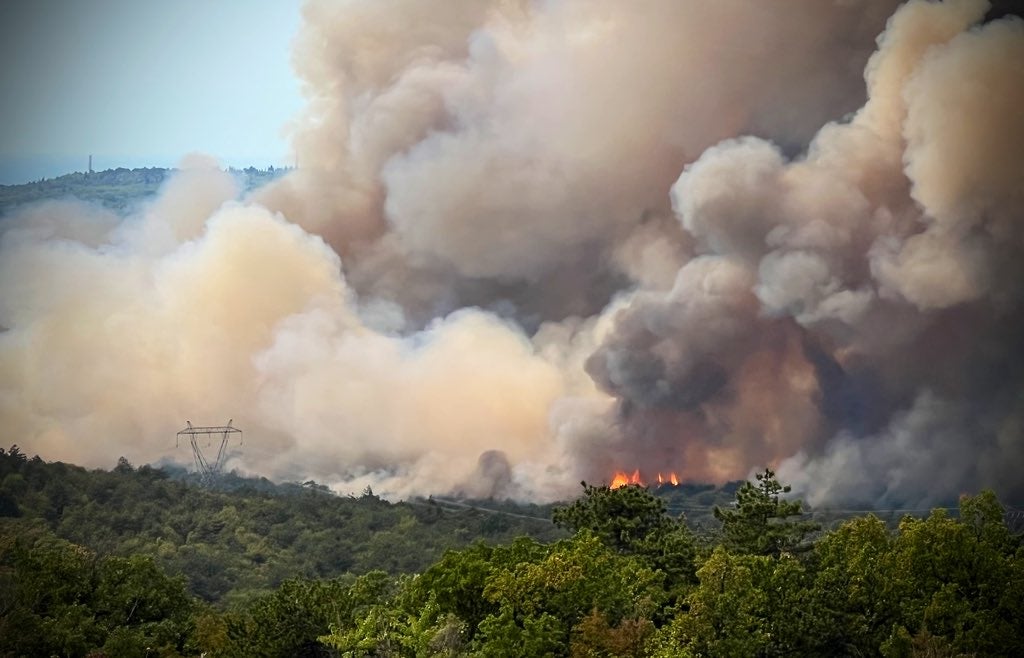 The First World War ended 104 years ago, but thanks to wildfires burning the European continent, echoes of the Great War are being heard. And seen. And nearly killing firefighters because bombs left over from the conflict are blowing up.

A massive wildfire is currently raging in the Kras region in Slovenia’s southwest. The fires are having the unexpected effect of setting off multiple unexploded ordnances (or UXOs) left in the ground from World War I. The fire has burned more than eight square miles, and forced at least three villages on or near the Italian-Slovenian border to evacuate, including the border town of Opatje Selo. More than 1,000 firefighters and elements of the Slovenian military have been fighting the blaze.

The fires alone are presenting risks to firefighters, but the risk of sudden, unexpected explosions add another level of danger. Local media reported that one explosion sent shrapnel right by a group of firefighters, but no one was injured in the blast. Slovenia has sent in bomb disposal teams to help clear the space for containing and battling the fires. Slovakia, Austria and Croatia have also dispatched helicopter crews to assist in the efforts.

“The problem is that because of the unexploded ordnance firefighting units cannot penetrate into the fire but can only act on its edges,” Slovenian Defense Minister Marjan Šarec told the Slovenian Press Agency.

During World War I, the border fight between Italy and the Austro-Hungarian Empire saw more than 200,000 people die. Among the campaigns there were 12 battles to capture and advance across the Isonzo River, led on the Italian side by Luigi Cardona, who was infamous for his dedication to throwing troops into enemy fire and incurring heavy losses.

The fires burning across Slovenia are part of a wave of fires in Europe right now, exacerbated by a heat wave that prompted massive evacuations in multiple countries. The same high temperatures melted a Royal Air Force runway in the United Kingdom this week. Fires in Spain have killed at least 500 people, according to the Spanish government.

The ordnances appear to be standard explosives. According to World War I historian Simon Jones, it’s highly unlikely the unexploded bombs now going off contain mustard gas or any other chemical weapons. Although Austria-Hungary ordered mustard gas shells to the border front against the Italian armies in 1918, there was no evidence any were fired in the fighting.

Even though wars end, the risks from UXOs continues on for decades to come. The former Yugoslav nations still deal with landmines left over from the wars of the 1990s. And Japan is still recovering and disposing of UXOs from World War II. Experts and people working in ordnance disposal believe it will take several more decades to clear the UXOs left over from World War I.