Judy Douglas' brother was one of 129 men who died when the USS Thresher sank in 1963. "Long time coming," Douglas said of the memorial. "I mean it's going to be quite an experience." 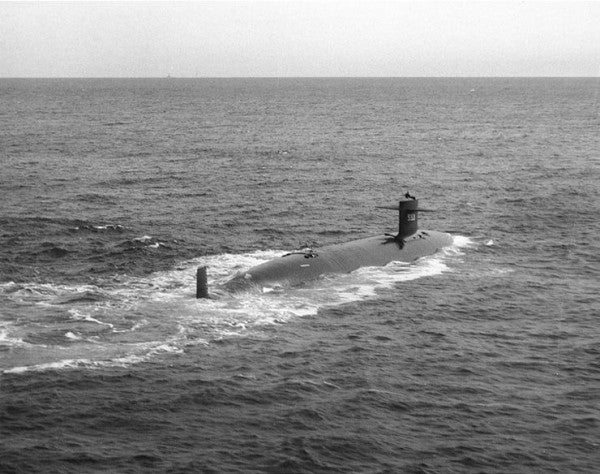 Judy Douglas has waited 56 years for this moment.

Her brother Lt. John Smarz Jr. was one of the 129 men who died when the USS Thresher, the most advanced submarine of its era, sank to the ocean floor during a deep dive test on April 10, 1963, about 220 miles east of Cape Cod. The event remains the worst submarine disaster in U.S. history.

On Thursday, the 79-year-old Douglas, of Shelton, Conn., will gather with other family members of the deceased at Arlington National Cemetery for the unveiling of a memorial in honor of the Thresher crew and the submarine safety program that came afterward, which, Douglas said, she considers part of her brother's legacy. She and about 50 others will be taking a bus down from Norwich organized by the memorial fundraisers, who had raised $60,000 in private donations for the marker.

“Long time coming,” Douglas said of the memorial. “I mean it's going to be quite an experience.”

The effort to memorialize the 129 men was spearheaded by Kevin Galeaz, a submarine veteran who lives in New Hampshire. The memorial, which went through various levels of approval and ultimately was endorsed by the secretary of the Army, will be located on the Roosevelt Drive walkway that runs between the cemetery's welcome center and the Tomb of the Unknown Soldier. Former chief of naval operations, retired Adm. John Richardson, is among those expected to give remarks at the dedication ceremony.

On Wednesday, before boarding a bus for the dedication ceremony, Douglas recalled how she'd been out shopping with her mother when she first heard the news about the Thresher. The song “Our Day Will Come” was playing on the radio.

“They broke in and said that the Thresher was missing,” she said.

Her mother shut out the world after her brother was reported deceased but kept thinking he would eventually come home.

“You know when something like that happens, that's what you do, you wait for them to knock on the door because you don't have anything to prove that they're gone,” said Douglas, who brought with her a copy of the Aug. 11, 1963, edition of the Evening Sentinel, a newspaper based in Ansonia, Conn., the front page of which reads in big letters, over the fold: “Hope dies for 129 men on sub.”

The page features an article with a picture of her brother, the headline of which reads, “Shelton Navy Lieutenant missing on Navy sub.”

Her brother, who was 33 when he died, left behind his wife and three small children, two of whom will be at the memorial dedication.

Several former crew members also are expected to attend, including 82-year-old Ira Goldman of Waterford, who would have been on the Thresher if he hadn't gone to a Navy training school for machinist's mates.

Goldman has kept a Thresher scrapbook, which includes biographies of the crew members and photos and articles from major milestones in the submarine's life. Family members who were too young to remember their deceased relatives have relied on him for information.

The Navy has said the most likely cause of the sinking was a failure in either a pipe, a pipe valve or a hull weld, causing flooding near the engine room. In response to the tragedy, the Navy created a program that developed new submarine safety standards, known as SUBSAFE, that's still in existence today. No submarine certified under the program has been lost.

“This memorial not only perpetuates memories of men lost, but also the submarine safety legacy that has and continues to protect the lives of the men and women who serve on our nation's submarines,” Galeaz said.

A retired Navy captain, James Bryant, in early July filed a Freedom of Information Act lawsuit against the Navy, seeking records related to the sinking of the submarine, which, he has said, could help shed light on possible causes that have not been made public.

Bryant, who was hoping to get the information before the dedication ceremony, said by phone Wednesday that he is meeting with Navy officials in Washington on Thursday morning to try to resolve the suit.

Galeaz said the families are mixed on whether they want to re-examine the loss. Some still are curious about what happened, while others see no value in releasing more information to the public.

Douglas said she believed the Navy's version of what happened and didn't seem interested in finding out any potentially new information.