Congress plans to ban sale of tobacco products to anyone under 21, and yes, that includes the military

The smoke pit might be getting a lot less crowded. 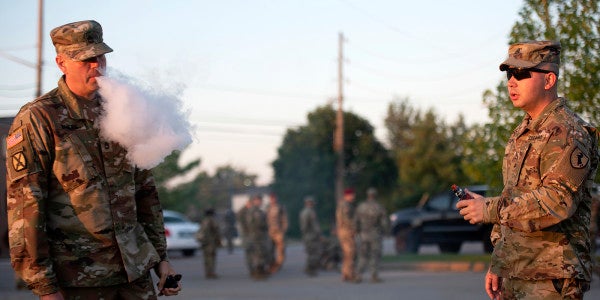 The smoke pit might be getting a lot less crowded.

On Tuesday Sens. Mitch McConnell (R-Ky.) and Tim Kaine (D-Va.), released a joint statement saying that the Tobacco-Free Youth Act they introduced earlier this year had successfully made it in to this year's budget bill.

The measure will raise the nationwide minimum age to buy tobacco products, including e-cigarettes and vaping devices, from 18 to 21, and will apply to members of the military. The year-end congressional spending bill appears likely to be signed into law this week, according to the Washington Post.

The Tobacco-Free Youth Act was pushed by McConnell and Kaine, who both come from states with strong ties to the tobacco industry, and based on their joint statement, was inspired by concerns from constituents over youth tobacco use.

“Since I introduced my legislation earlier this year to raise the minimum nationwide purchase age for tobacco products from 18 to 21, stories of vaping related illnesses and deaths — especially among young people — have stunned Kentucky and the nation,” McConnell said in a statement. “It is because of my position as a tobacco state Senator that I introduced this bill, and it is because of my role as Senate Majority Leader that it will become law. Together, we can help Kentucky's young people grow up healthy and with every opportunity to reach their full potential.”

A 2015 report from the Institute of Medicine concluded that raising the required age to purchase tobacco from 18 to 21 would result in “approximately 223,000 fewer premature deaths, 50,000 fewer deaths from lung cancer, and 4.2 million fewer years of life lost for those born between 2000 and 2019.”

“I'm thrilled that our bill to raise the tobacco age from 18 to 21 will get a vote in the House and Senate this week,” Kaine said in the statement. “This legislation will have an enormous positive impact on public health in America, and it's needed now more than ever as we grapple with the youth e-cigarette epidemic. It's estimated that raising the tobacco age to 21 would reduce the number of premature deaths by 223,000 and significantly reduce lung cancer deaths and other health problems.”