The Army’s 3rd U.S. Infantry Regiment continues to stand guard over the Tomb of the Unknown Soldier, even though Arlington National Cemetery is closed because of the novel coronavirus (COVID-19) lockdown 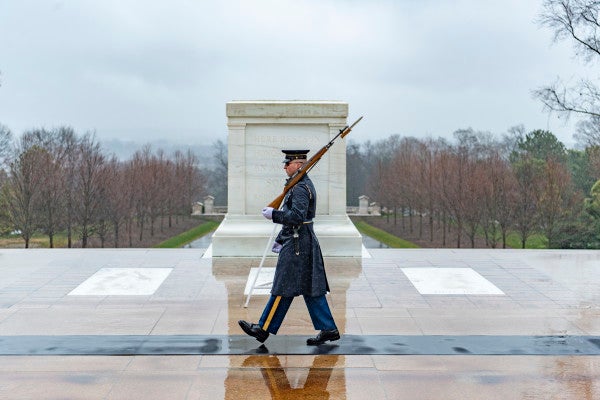 The Army’s 3rd U.S. Infantry Regiment continues to stand guard over the Tomb of the Unknown Soldier, even though Arlington National Cemetery is closed because of the novel coronavirus (COVID-19) lockdown.

“For us, it doesn’t matter if it’s a hurricane, or if it’s the coronavirus.” Cpt. Harold Earls told CBS affiliate WUSA9. “We are always here, we are always guarding.”

Sentinel Earls is part of a tradition that began July 1,1937, and has seen more than 30,000 straight nights of patrol. The gravesite he and fellow servicemen and women guard holds the remains of unidentified soldiers from America’s foreign wars. The first burial was approved by congress in March 1921 and represents unaccounted for U.S. soldiers who lost their lives in WW1.

The marble tomb holding that body bears the inscription “Here rests in honored glory an American soldier known but to God.”

Remains of unidentified soldiers from WWII, the Korean War and the Vietnam War were later buried near the tomb. The unknown soldier from the war in Vietnam was identified through DNA testing and returned to be buried near his his home in 1988, though a plot honoring missing servicemen of that war remains on site.

The guards who patrol the sacred ground, known as “The Old Guard,” live on site at the cemetery outside of Washington, D.C. They repeat a continuous silent patrol that requires taking 21 steps on a black mat that stretches from one end of the memorial to the other, stopping for 21 seconds to look toward the capitol, turning back to look down the mat for 21 seconds, then walking 21 steps back to where they began.

Cpt. Earls told USA9 that he feels closest to soldiers passed when he’s making his rounds while Arlington Cemetery is closed to the public. He thinks it’s important to maintain the patrol even in the face of a pandemic.

“I think it’s important for us to show to this country that we haven’t forgotten,” Earls said.