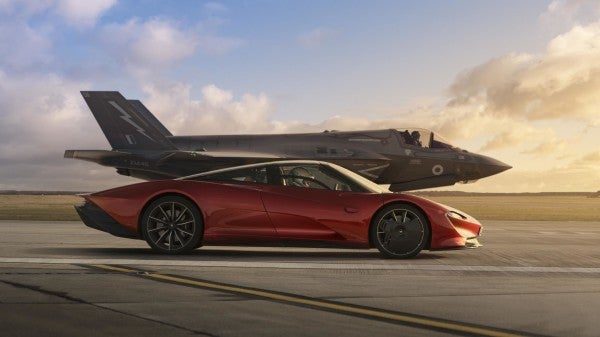 Auto fantasy series “Top Gear” is now airing its 28th season in the U.K., and the latest episode featured a race between a high-performance sports car and a fighter jet. Both the car and the jet represent the cutting edge of their respective technologies.

The Royal Air Force is now flying the F-35 Lightning II, one of the most expensive pieces of kit ever purchased by the Pentagon and a plane that's had more than its share of problems with combat readiness. Still, the jet has a top speed of 1,200 mph. Street price of an F-35B: $116 million.

The McLaren Speedtail is the successor to the legendary F1 sports car and can reach a top speed of 250 mph. With 1,000 horsepower, the hybrid vehicle also features a center steering wheel to maximize balance for superior handling. The car's real selling point is its acceleration, going from zero to 200 mph in 14 seconds. Street price of Speedtail: $2.24 million.

Please note: If you're interested in blowing your retirement savings on a Speedtail, they're not street legal in the U.S. and the initial production run is sold out anyway.

Since we don't get the new episodes here on BBC America until March, we dug around the dark corners of the internet to discover exactly what happened.

The BBC released a clip that shows what looks like a drag race, but the car and the plane are actually racing around a triangular-shaped track. The wide turns the F-35B has to make after takeoff are supposed to give the Speedtail a fighting chance in the race.

Spoiler rules of the internet say we're not supposed to reveal who won the race, but you can use the numbers listed above to do the math. No matter the outcome, it's worth setting your DVR to see the entire piece when “Top Gear” airs in the U.S. next month.

This article originally appeared on Military.com: