The top U.S. commander in Afghanistan said Thursday that several thousand more troops were needed to train and advise Afghan... 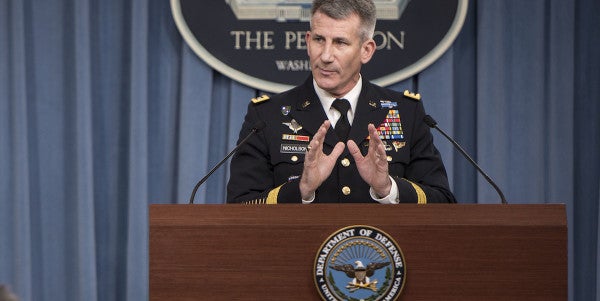 The top U.S. commander in Afghanistan said Thursday that several thousand more troops were needed to train and advise Afghan forces and break the “stalemate” in their fight against the Taliban.

Army Gen. John Nicholson told the Senate Armed Services Committee that the troops could come from the U.S. or its allies, although he did not give a specific number.

“I believe we’re in a stalemate,” Nicholson told committee Chairman Sen. John McCain, R-Ariz., when asked whether the U.S. is “winning or losing” in a conflict that has stretched for a decade and a half.

There are 8,400 U.S. troops in the country, conducting counterterrorism operations against insurgents and training and advising Afghanistan’s military, along with 6,400 troops from NATO countries. Last year, then-President Barack Obama announced that he would keep that number until the end of his term, instead of dropping it to the previously planned 5,500 by early 2017.

In a phone call in December, Trump reportedly told Afghan President Ashraf Ghani that he would consider a troop increase to stop the country’s security situation from deteriorating, but he devoted little attention to the conflict during his presidential campaign other than to call the situation in Afghanistan “a mess.” He did say troops would probably have to stay there “because that thing will collapse in about two seconds after they leave.”

The Trump administration has not outlined a plan for the 16-year-old conflict, however, instead focusing on border security and asking the Pentagon to devise a strategy to defeat the Islamic State. The president gave Afghanistan only passing mention during his speech Monday at U.S. Central Command, which has responsibility for military operations in the Middle East. He thanked “everyone serving overseas, including our military personnel in Afghanistan.”

Asked about increasing the number of troops in Afghanistan, White House Press Secretary Sean Spicer said Thursday only that Trump would “heed the advice of the generals and Secretary Mattis.”

“That conversation has yet to happen,” he said at a White House news briefing.

In his seven-minute statement at his confirmation hearing, Secretary of Defense James Mattis also mentioned the conflict only briefly. However, he is a strong supporter of the NATO coalition that is leading the advising and training efforts, and given his own experience in Afghanistan — he once headed Central Command — is expected to take a hard look at operations on the ground.