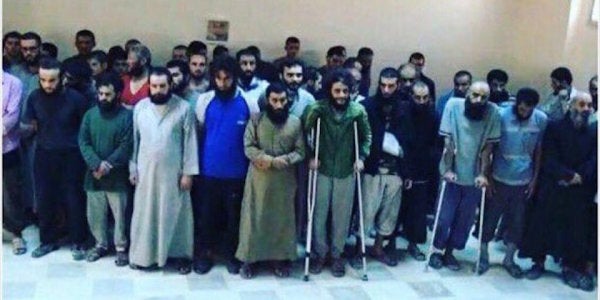 After US-backed Kurdish and Syrian forces defeated ISIS in the terror group's final Syrian stronghold of Raqqa, Brett McGurk, the special presidential envoy for the Global Coalition to Defeat ISIS, tweeted a picture of its fighters surrendering en masse.

“#ISIS lost nearly 6000 terrorists in #Raqqa, then surrendered in large numbers. Once purported as fierce, now pathetic and a lost cause,” tweeted McGurk.

#ISIS lost nearly 6000 terrorists in #Raqqa, then surrendered in large numbers. Once purported as fierce, now pathetic and a lost cause. 4/6 pic.twitter.com/JV9EFywqd4

McGurk's photo comes after other reports of mass surrenders of ISIS fighters as the terror group loses wide swaths of territory and changes tactics to allow surrender. Previously, ISIS had leaned heavily on its members' willingness to die for the cause.

Today, the soldiers seem content to surrender to Kurdish forces, who take them prisoner instead of other forces, which may execute or even torture them.

With the liberation of Raqqa, ISIS now controls only a small area of mostly desert towns along the Syrian and Iraqi border. Local militias, governments, and a US-led coalition of 67 nations have led a ground and air offensive to erode the group's territory since its inception in 2014.

McGurk posted several other pictures of the US-led forces reclaiming schools and other vital infrastructure.